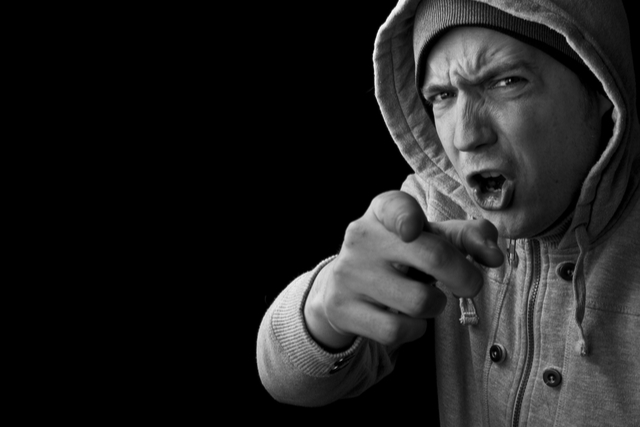 Dialogue is one of the best ways to create power dynamics between your characters. When one character is using aggressive language and the other is backing down, it’s easy to get a sense of the relationship. A passive-aggressive comment is an effective way to get across dislike or distrust. Or, having one character using a formal name while the other uses an informal name is a subtle way of letting your reader know who holds the power in that relationship.

Your readers will be able to learn so much more from your dialogue based on the choice of language you employ. Is it dismissive, aggressive or timid? Are they words that you would use when you are feeling comfortable or feeling awkward? Are they demanding words or appeasing words? Does one character interrupt or speak over the other? All of these give your readers clues about the power dynamic between your characters and help them to read between your lines.

So many stories are dependent on readers getting a clear understanding of the class differences between their characters. Using linguistics is one way to get those differences across. Writers must be careful not to fall into negative stereotypes, but the reality is that a kid who grew up in a dysfunctional poverty-stricken Detroit family will speak differently to a kid who grew up in a dysfunctional wealthy Connecticut family. Don’t overplay this. Not every word needs to be phonetic or it will sound like a caricature and distract from the content, but a few dialectic words here and there keep the character’s background at the front of your reader’s mind.

Likewise, if one of your characters is meant to be from England, then their writing should reflect the way that British people speak. Again, be careful here. Not all Brits actually say things like “Core blimey, Guvner, I’m knackered!” but they will call the trunk of the car "the boot" and refer to their cell phones as "mobile phones". Your writing should reflect these differences if it is to feel real.

I love it when I have insider knowledge about a character’s inner workings and they conflict with what he or she says or does. When you know that the man luring the woman to his home is a serial killer, but all she hears is “Would you like to come back to my place and have a look at those photos I was telling you about?”, it gives you a thrill. You want to step into the story and yell “Don’t go! He’s not really a photographer!”

In life, we all manipulate and deceive at some level (though usually not in such a murderous way!). If the reader knows that Jim doesn’t want to go to the party for fear of seeing his ex, but calls and says that the babysitter cancelled, then the reader is in on the deception. A good writer will be able to persuade their reader that this deception is good or bad, depending on where they want the story to go. Should we feel sorry for Jim for being too anxious? Or should we feel angry at him for telling the lie? Either way, the reader has seen through the facade and learned something about Jim’s agenda and his vulnerability.

Having your dialogue contrast with your description is a great way to indicate a second meaning to your reader.

Sarcasm is useful in dialogue; it can illustrate either a joke or an insult. It is frequently used when speaking but much more difficult to get across on the page, yet it can add a level of realism to your writing that will engage your reader.

5) Give clues or hidden agendas

Dialogue is a great way to foreshadow. If a conversation is about searching for a lost child and you plant a small, seemingly irrelevant seed that a certain character might have a different reason for wanting to find the child, your reader will remember it and feel on the inside track when you reveal the reason. If your male sales clerk states that he has never been to a certain bar in Chapter 3, but it’s revealed in Chapter 7 that he used to work there, that tells the reader he is not trustworthy. Perhaps your female grad student character is avoiding questions (or, conversely, she is asking too many questions) and steering dialogue in a certain direction. These puzzle pieces will be stored away by your reader until eventually a picture is formed in their mind’s eye.

Writing dialogue is a difficult skill to master. It must be extensive enough to allow your characters to engage with one another in a way that feels real and allows for relationships to form, but limited enough that the reader won’t get bored. In real life, dialogue includes a great deal of tedious fluff: “Did you wash the salad for dinner?”, “I can’t seem to find my glasses”, “I think I’ve seen this episode of Wheel of Fortune before.” On the page, dialogue must only be included if it is moving your story forward in some way. If you are setting the scene as a mundane night at home, then including a dull chat about a TV show might be ideal and help the reader understand the relationship’s dynamic. Otherwise, cut the humdrum chatter of life and use dialogue with purpose.

Some authors also struggle with punctuation in dialogue. It's worth doublechecking the rules to make sure that you've got it right.

With these five tricks up your sleeve, you can craft realistic conversations that enhance your plot and deepen the reader’s connection with your characters. Bring dialogue to life and the rest will follow.

Did you know that ProWritingAid has a Dialogue Report? It highlights all dialogue tags in your document so you can replace them with more powerful action. Give it a try and see if it helps strengthen your characters.

Lisa Lepki is ProWritingAid's CMO and the Editor of the ProWritingAid blog. A word nerd, she loves the technical elements of writing almost as much as the writing itself. She is the co-author of The Novel-Writing Training Plan, Creating Legends: How to craft characters readers adore... or despise!, How to Build Your Author Platform on a Shoestring and 20 Editing Tips from Professional Writers.

franky.edder.dionne
You get 5 out or 5 stars for this article.

petermuya551
I Need Help To Finetune Or Polish My Mc