Here at the Novel Factory, we’re into processes.

Writing a novel is a long, hard slog and, while we’re certainly not averse to a bit (or a lot) of hard work, we like to make sure we’re as efficient as possible and aren’t wasting time where we don’t need to.

One way we believe writers can save themselves from the risk of writing for months or even years and ending up with a spaghetti mess of a manuscript, is to follow some kind of formula, or roadmap, which helps avoid wasted time staring at blank screens, going down blind alleys and writing dozens of scenes that have no place in the final novel.

Of course, none of this is set in stone and some people may follow the formula to a greater or lesser degree, but most people would agree that it’s better to have a map and deviate from it then to have no map at all.

So, I hear you cry, what is this magical formula of which you speak? With no further ado, let us delve into the roadmap.

We will just touch on each element here, but for full detailed articles on each step, take a look here.

Step one: the backbone - aka. the premise

The premise is a single line which expresses the central idea of your novel, including character, situation, objective, opponent and disaster.

Step two: the skeleton - aka. the universal storyline

The skeleton is based on the Hero’s Journey, and has all the elements which are generally found in bestsellers and blockbusters. This goes from introduction to the protagonist’s world, through call to action, mentor teaching and various other steps up to the final conflict and return home. You can use a template to help build your skeleton.

With a basic plotline in place, it’s time to start working out key traits your major characters. This will include full name, age, appearance, summary of role and motivation. 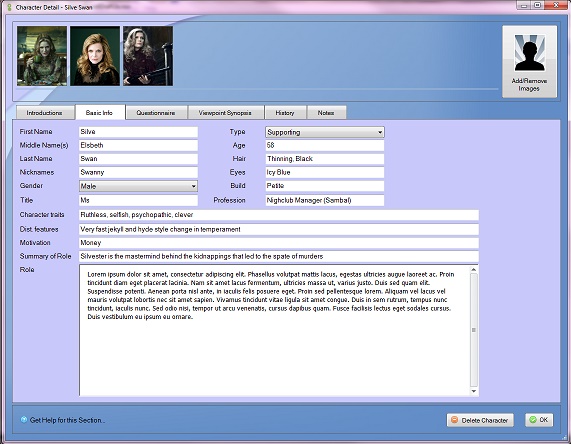 With some characters starting to formulate themselves, you can expand your skeleton into a single paragraph short synopsis, with outlines of the major events and scenes.

The extended synopsis adds more detail into the short one and fills a full page. By building the story up in this way you ensure the structure stays balanced and you have a better chance of keeping the pace and progress of the plot.

You really need to read a whole article or chapter on the goal to decision cycle, but it’s essentially a magic micro rule of thumb you can use to ensure your plot keeps racing along. In essence you simply follow these six steps:

Conflict – someone or something stops the protagonist achieving their goal

Disaster – something happens that not only takes the protagonist further than ever from their goal, but preferably adds on extra layers of peril

Reaction – following the disaster, the protagonist has an emotional and or physical response

Dilemma – the hero should have two choices, neither of them good, so the reader can empathise with the hopelessness of their plight

Around this time it’s good to have a little break from the plot and work on a bit of character development. Using questionnaires helps you think about aspects of your character that you might not normally, such as what’s in their pockets or their fridge or how they treat people worse off than them.

Your novel needs to take place somewhere, so it’s good to spend a little time thinking about the locations from their own point of view, rather than only as the stage for your puppets. This often allows you to discover details that will drive plot complications and to find elements that will tickle the sensations and bring the world to life.

By this time you will probably have some idea for sub-plots, important items and different threads of the story. This step lets you take the time to iron out all the details and make sure what you’ve got so far adds up and doesn’t leave any loose ends.

This is a really great step that many Novel Factory users have commented on as one of the most positively impacting factors in the writing of their novel. Quite simply, you go through each scene from the point of view of each of the major characters. You may be surprised at how much this adds depth and realism to your story as these characters take on lives of their own, rather than just being tools to further your main plot.

This is the bridge between synopses and drafts. It’s a bit more than an outline, but you’re not quite writing prose yet. In this stage you write a brief outline of each scene with roughly what happens and what is said, noting down any sparks of genius you might have in description or dialogue. Your blocking will highlight any major plot holes and will give you more ideas for subplots and detail.

Okay, time to roll your sleeves up and get going on the first draft. If you’ve done all the previous steps, you will find that this first draft takes a fraction of the time it would otherwise, and not only that – your first draft will be in much better shape. The first draft is just ‘shovelling sand into a box so that later you can make sandcastles’ (Shannon Hale), so don’t do any editing as you go, don’t worry if it’s riddled with clichés, just plough on through and get to the end as fast as you can. Aim to complete the first draft in about a month, going a rate of around 2,000 words per day, with a few days off. 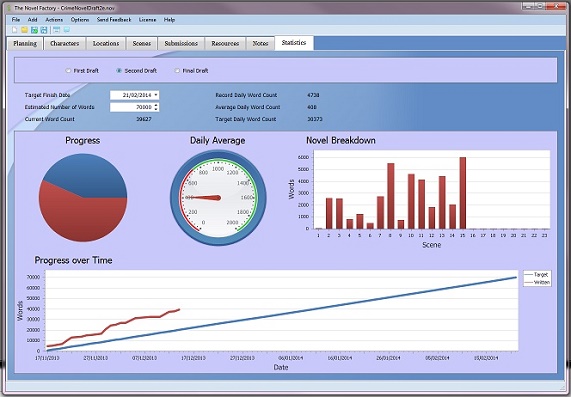 With your first draft under your belt, you’ll probably start to notice some themes have appeared, which you can now consciously develop. These themes may be in the form of colours, birds, political leanings – it’s your book and your psyche, so they could be anything. See if you can develop these themes to reflect and enhance your characters and plot.

Time for the second draft. This is going to be much more of a slog than the first draft. It’s going to take longer and it’s going to be slower going. That’s because now you should be trying to make every word count. Treat this like you are working on the final manuscript. Use an editing tool (such as ProWritingAid!). Compare your prose to your favourite authors, show it to your writing group. Polish every single word. Once you’re done, take a few months off and do something completely different.

So, you thought you were working on your final draft last time? Wrong. When your few months’ break is up, it’s time to go back and read over everything you’ve done. Areas for improvement and horrible glaring errors and elegant brainwaves will leap out at you, begging to be dealt with. Deal with them. Then deal with more. Keep polishing and improving that manuscript until you’re tapping at the keyboard with the bare bones of your fingertips and you know every word by heart.

Now, your manuscript is ready to submit.

Katja L Kaine is the creator of the Novel Factory – writing software for novel writers . The Novel Factory keeps track of all aspects of your novel, from characters, to locations to settings to drafts. It includes lots of useful information and templates, including popular plot outlines (romance, horror, hero’s journey and more), character questionnaires, characterisation checklists and much, much more.

10 Free Writing Apps and Tools
How to Edit Your Manuscript
How to Craft an Engaging Arc for Your Story
How to Use Readability Scores
Essential Reading: the Best Books of All Time in Each Genre
How to Use Deus Ex Machina like Stephen King
Allusion: What It Is and How to Use It Effectively
Upcoming Free Online Events for Writers
Win a Free ProWritingAid Lifetime License

Improve your grammar
what are you using for the character profiles?! that looks so convenient!
By irolrami on 28 May 2018, 05:59 AM