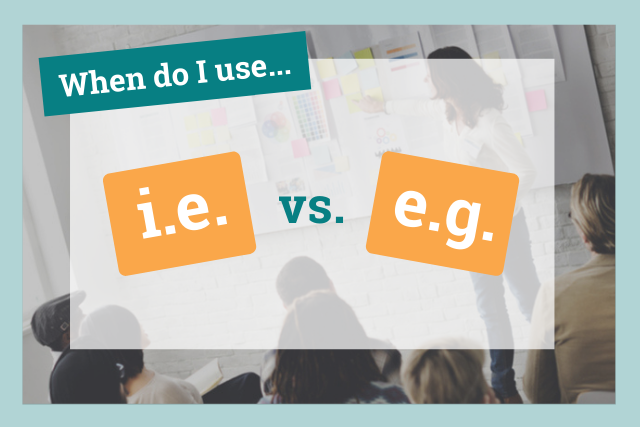 I.e. and e.g. are two of the most widely used Latin abbreviations in English writing. While these abbreviations are relatively straightforward on their own, many writers (and readers) get into occasional trouble when it comes to differentiating the two.

Before we get to why this happens, here’s the quick rundown:

Read on for more about these abbreviations, their origins, and their usage.

What Does i.e. Mean?

I.e. is an abbreviation of the Latin words id est, which translate to “that is.”

More specifically, in English writing, i.e. can also be read as “that is to say,” “specifically,” “namely,” or “in other words,” as noted above.

As with those phrases, i.e. introduces further specificity to a previously mentioned topic—and it tends to directly follow the topic it specifies. 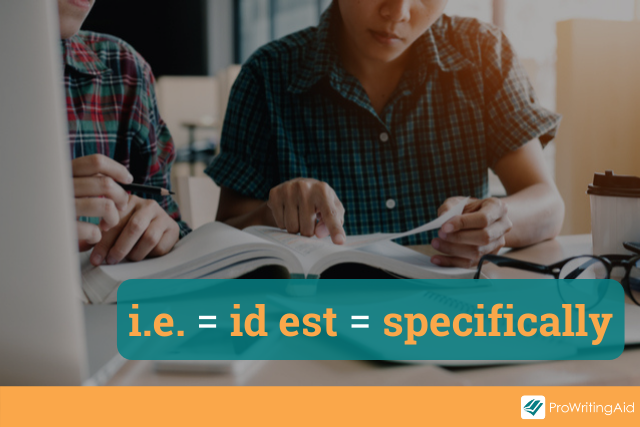 Let’s get a feel for i.e. using some examples:

Here, i.e. is used to further specify an aforementioned topic (the “wight,” which is a more poetic but less common noun) by providing further information that’s more direct, to help the reader understand (“ghost” is a far more common synonym for this usage of “wight”).

In this example, “end of the day” is pretty straightforward, but could use some refinement in case the message’s recipient is, say, working from a different time zone or keeps different business hours. The “i.e.” statement clears things up and helps to eliminate misinterpretations.

The phrase “high probability” is informative, but a bit too general to make the statement useful. Here, “i.e.” stands in for “specifically,” and introduces a more exact figure.

E.g. stands for the Latin exempli gratia and is even more straightforward: it just means “for example,” and is used as a shorthand substitution for this phrase in English. While “i.e.” narrows down a topic, “e.g.” expands a topic by providing one or more examples. 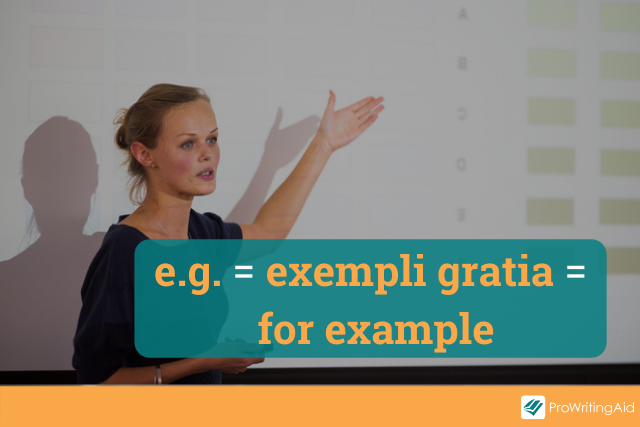 Take a look at these to get your sea legs:

Here, we used “e.g.” to expand upon the topic of horse-like, non-horse animals by providing every example we could think of.

In this example, you can see that we went down an equine Wikipedia rabbit-hole and are now learning about zebras.

Here, e.g. is used to introduce a smattering of all the potential topics that could have been used to form sample sentences in this section, rather than doing, say, two in a row about nearly the same topic. 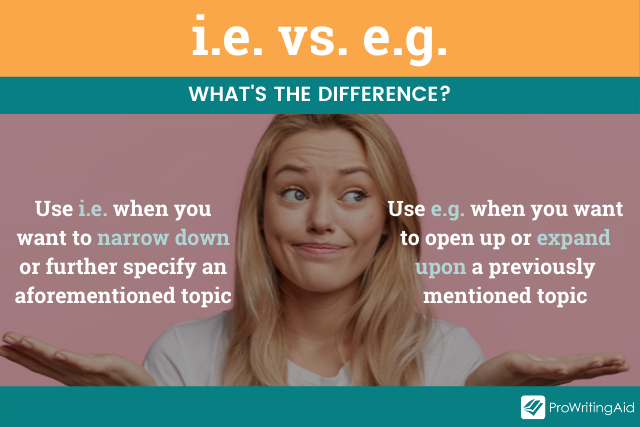 There are just a few straightforward rules when it comes to inserting i.e. or e.g. into a sentence.

First, each letter in both abbreviations must be followed by a period (which you’ve probably noticed by now from the preceding examples).

Second, each letter is put in regular casing, meaning that the letter are lowercase unless the abbreviation begins a new sentence. In these cases, only the first letter is capitalized.

Third, even though the full terms in Latin (id est and exempli gratia) are italicized, the abbreviations are not. 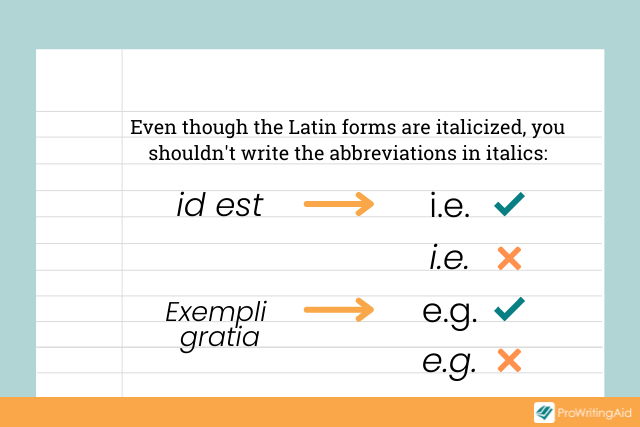 Lastly, the abbreviations are both followed by a comma when used within a sentence. This is fairly intuitive, since terms like “for example,” and “specifically,” are often followed by commas when used in a sentence, as well.

Note that this would work the same without the abbreviation: 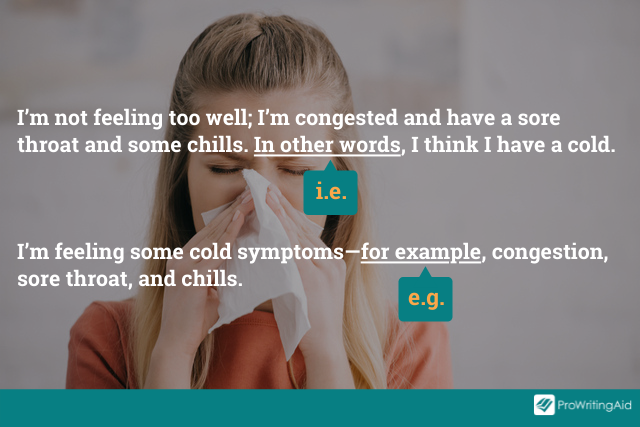 As you can see, i.e. and e.g. slot right into the sentence just as their full Latin or English synonyms would.

Do note that there are likely some style guides out there that will recommend using no comma after these abbreviations—but including the comma is nearly universal and is thus the safer bet.

If you’re not sure which you should do, consult your style guide of choice. If you don’t have a specific style guide to follow, the safe bet is to include the comma.

Find out how to set up your own style guide rules in ProWritingAid in this article.

Why Use These Latin Abbreviations, Rather Than Plain English?

Why should we even bother with Latin terms and abbreviations? Using these alternatives seems to be a step away from clarity, especially considering how often i.e. and e.g. are conflated with one another.

The thing about the idiosyncrasies of the English language is that they almost always originate not from a straightforward rule, a desire for consistency, or anything else that makes logical sense.

Rather, things like our vast usage of loanwords from other languages, and totally inconsistent pronunciations based entirely on context tend to arise from tradition.

English is, essentially, a bastard tongue, bred of the unholy marriage between Anglo-Saxon Old English and Norman French. Oh, and Scandinavian and just about every other language English has bumped into since the Dark Ages.

That, of course, includes Latin, and, since then, Latin has become a dead, but academically revered, language (you can probably thank the Catholic Church for this, even though the days of Latin mass are behind us). 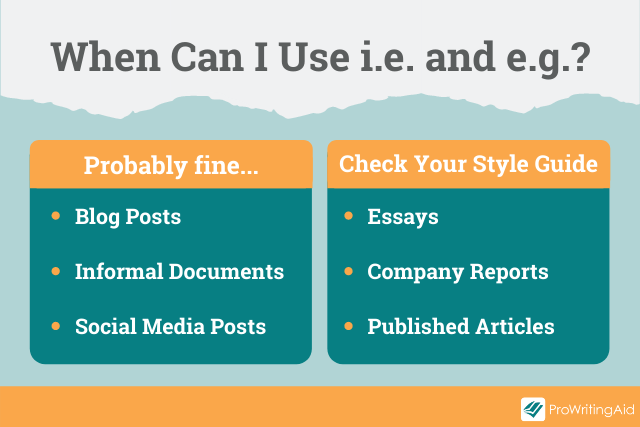 So, why do we use i.e. and e.g.? Because it’s tradition and because it makes you look kind of smart. It’s a style you’re likely to pick up in any academic or academic-adjacent field.

However, depending on your style guide (as always), you may want to avoid these abbreviations in formal writing. They may be Latin (very classy), but they’re still abbreviations.

Does that mean you should write out the full Latin phrases in formal writing? Well, that’s subjective, but it goes a bit too far in the other direction and may come off as haughty.

The safer bet is to just stick to the English while avoiding abbreviations for longer-form, formal writing. I.e. and e.g. are a better fit for any format where widely-used shorthand is acceptable (and even aesthetically preferred).

As always, context is key, so peruse other publications from within your industry (if applicable) to see what they do. These abbreviations may be a great fit for a research-oriented paper, but could be a poor fit for something like dialogue in a piece of fiction (as people don’t typically speak such abbreviations aloud).

There are a couple of tricks for remembering the difference between i.e. and e.g., but here’s the easiest: 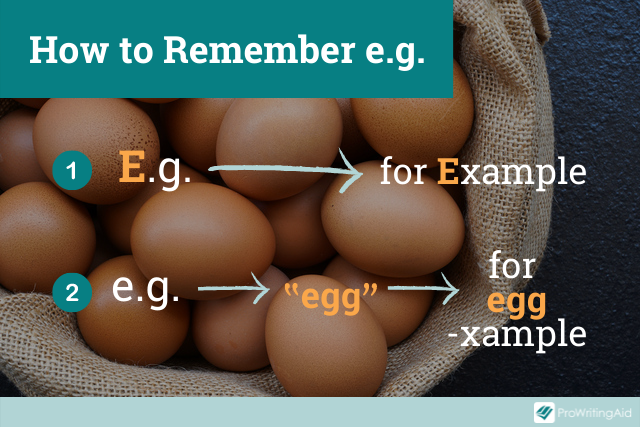 Of course, there’s still room for confusion there, since “i.e.” also has an “e” in it—you need to focus on the first letter of the abbreviation for this trick to work.

You could alternatively learn a trick that works for “e.g.,” then just remember that “i.e.” is the other one. 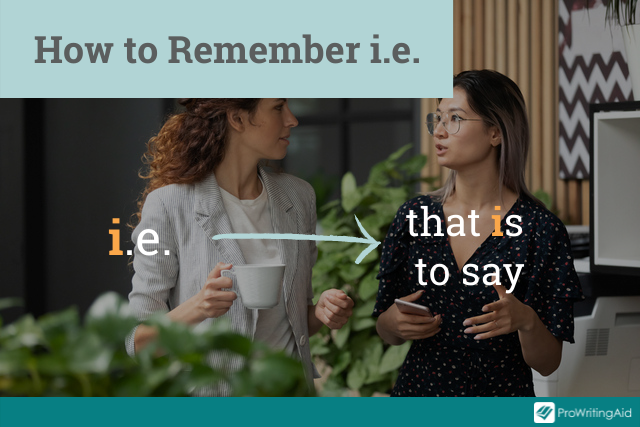 e.g. vs. Other Abbreviations for “Example”

It’s worth noting that other, similar abbreviations, such as “Ex.,” are not always interchangeable with “e.g.”

You could abbreviate this as:

However, you wouldn’t use e.g.:

You don’t want to do the above—it doesn’t look right, and it doesn’t make grammatical sense. This (incorrect) example would read:

The result is poor diction and a grammatical logic that makes no sense. It also sounds and looks wrong to native speakers.

The rule of thumb: “E.g.” is not intended to be used as short form for the word “example” by itself. It’s specifically an abbreviation for the Latin phrase (exempli gratia, which you don’t really need to commit to memory, unless you dig trivia) meaning “for example”—the whole thing. Both words. 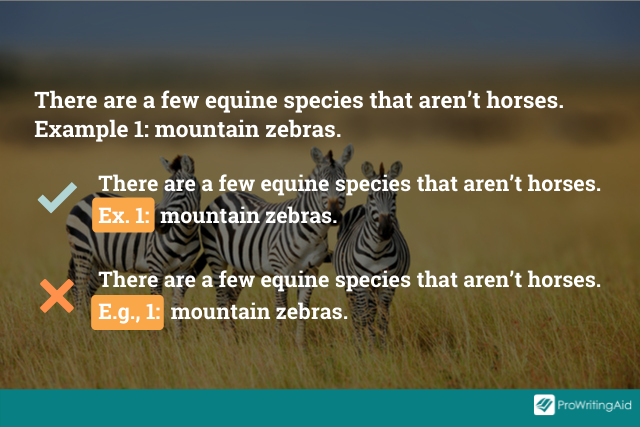 Now you’re ready to use e.g. to expand your ideas and i.e. to narrow them down. And remember—if you get stuck, ProWritingAid is always there to make sure you’re using the right abbreviation for your sentence.

Alex Johnson is a freelance writer for Review Geek. His memory isn’t great, but he vaguely recalls spending the first decade of his career working as an editor and feature writer for a Cape & Plymouth Business, a regional business magazine in Massachusetts. Academically, his background was in poetry writing and film studies, for some reason, and every day since has been a struggle.