Appositive Phrase: What Is It & How To Use in Writing 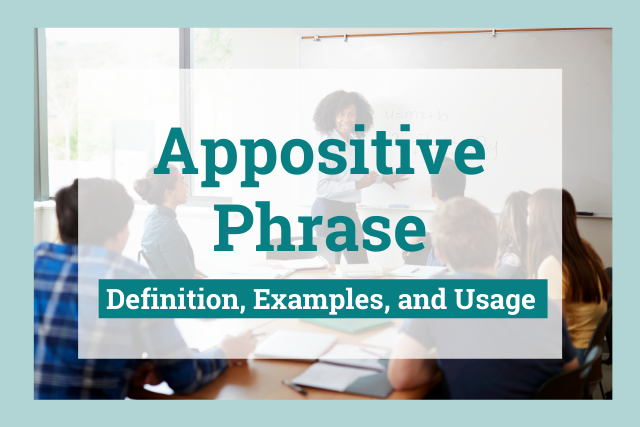 Sentences often contain more than a basic subject and verb. There are many ways to add more information to a sentence. An appositive phrase is one way to provide additional information about a subject or object.

Let's take an in-depth look at appositive noun phrases. We'll cover what they are and how to write them. We’re ap-positive you’ll be an expert in no time! 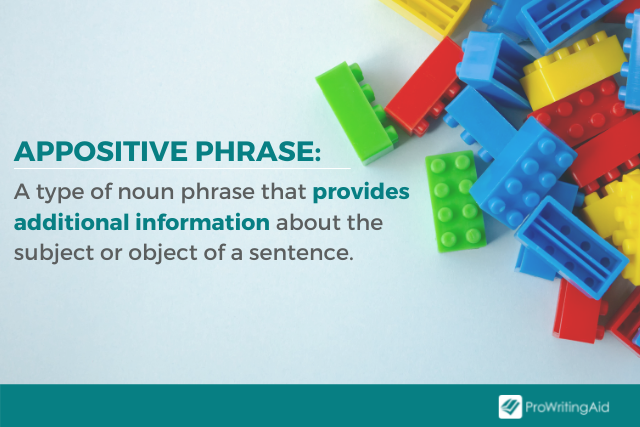 What Is an Appositive Phrase?

Noun phrases are a group of words that include a noun and its modifiers, even if the modifiers are just an article like "a" or "the." Here are a few examples of noun phrases:

Don't confuse appositive phrases with noun clauses. A noun clause is a clause with a subject and a verb that functions as a noun. For example, "I believe that love matters most." 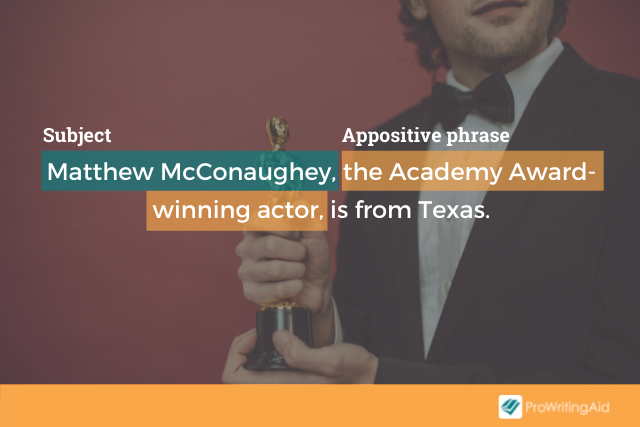 Here are a few appositive phrase examples. The appositive or appositive noun phrase is bolded in each example. The noun it is modifying is underlined.

Sometimes, an appositive might just be one word, usually a proper noun, as in the second example above. Typically, an appositive phrase has at least two words: an article and a noun.

What Is the Difference between an Appositive Phrase and a Participial Phrase?

It's easy to confuse participial phrases with appositive phrases. Both are groups of words that add additional information to a noun in a sentence.

An appositive phrase does not contain a participle. It is comprised of a noun and any of the noun's modifiers.

What Are the Two Types of Appositive Phrases? 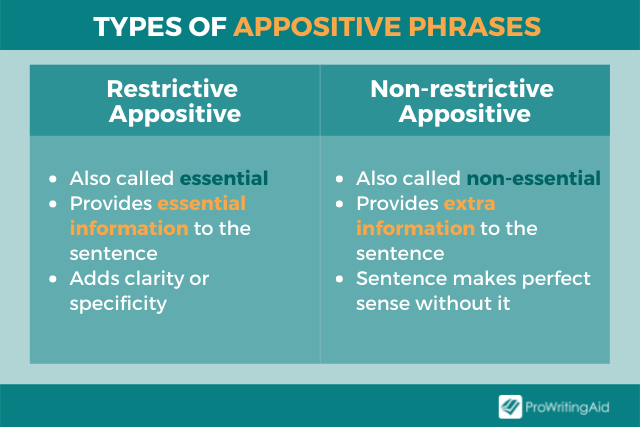 A restrictive appositive, which is also known as an essential appositive phrase, provides essential information. The sentence will not make sense without it or at least be too vague to fully understand.

Let's look at two appositive examples. Once again, the appositive is bolded and the noun it modifies is underlined. Can you determine which one is an essential appositive phrase and which one is nonrestrictive?

The first example is a nonrestrictive appositive phrase. "A five-day festival" is extra information; the sentence would still make sense if we removed it.

The second sentence features a restrictive appositive phrase. If you came up to me randomly and said, "Linda is on maternity leave," I would wonder who Linda is. Are you talking about a friend? An aunt? The appositive is restrictive because it makes the sentence less vague.

You might notice another difference in these appositive examples. Let's look at how we write these two types of appositives.

How Do I Write an Appositive Phrase?

Appositive phrases can go before or after the noun they modify. How you punctuate them depends on whether it is a nonrestrictive or restrictive phrase.

Where Do I Put Commas with a Nonrestrictive Appositive Phrase? 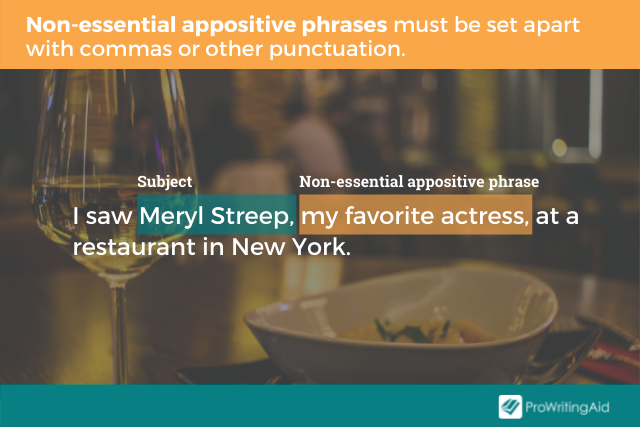 Typically, we do this with commas. When the nonessential appositive precedes the noun that it modifies, we put a comma between the appositive and the noun. This applies at the beginning or the end of a sentence. Here are two examples:

When the nonrestrictive appositive is in the middle of a sentence, we place commas on either side of the phrase.

We can also use other types of punctuation, such as em-dashes and parentheses, to set apart appositive phrases.

So remember, if it's a nonessential appositive phrase, use punctuation to set it apart from the rest of the sentence. 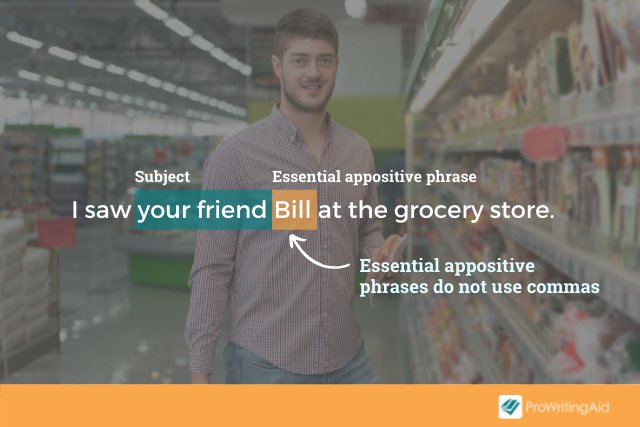 Because restrictive appositives and appositive phrases provide essential information, we do not set them apart with punctuation. Essential appositives do not need commas.

We need the information provided by the restrictive appositives for clarity or specificity, so we don't use commas.

It's good to know the grammar rules but if you ever forget, ProWritingAid is always there for you. If you ever miss a comma after an appositive, ProWritingAid will highlight and you can fix it easily with one click.

What Are Some Appositive Phrase Examples?

Now that we understand what appositives are and how to write them, let's take a look at more examples. 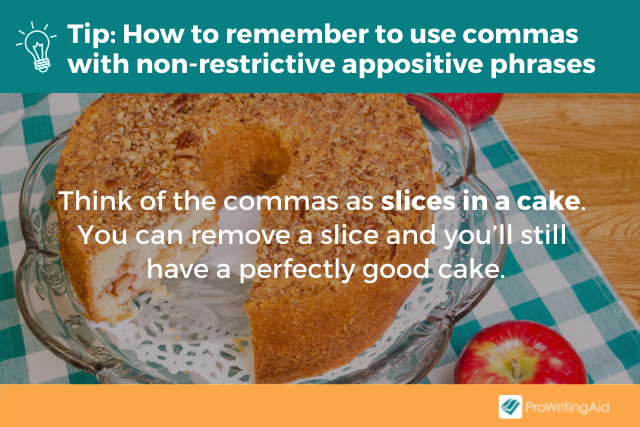 What Are Examples of Restrictive Appositives?

First, we'll take a look at essential appositives. Remember, these provide essential information to the sentence's meaning. As in the previous examples, the appositive is bolded and the main noun is underlined.

In all of these, we need the appositive to give more information. There are many movies, stories, and baseball teams. Most people have more than one teacher. The appositive is restrictive because it adds specificity that is essential to the sentence's meaning.

What Are Some Examples of a Nonessential Appositive Phrase?

Now let's take a look at some nonrestrictive appositive phrase examples. These provide extra information, but the sentence makes complete sense without the phrase.

All of these sentences are perfectly clear without the appositive, so they are nonessential.

Just remember, like any other grammatical construction, appositives can add variety to your sentence structure.

Now you know everything there is to know about appositive noun phrases. Let us know what other grammar features confuse you! 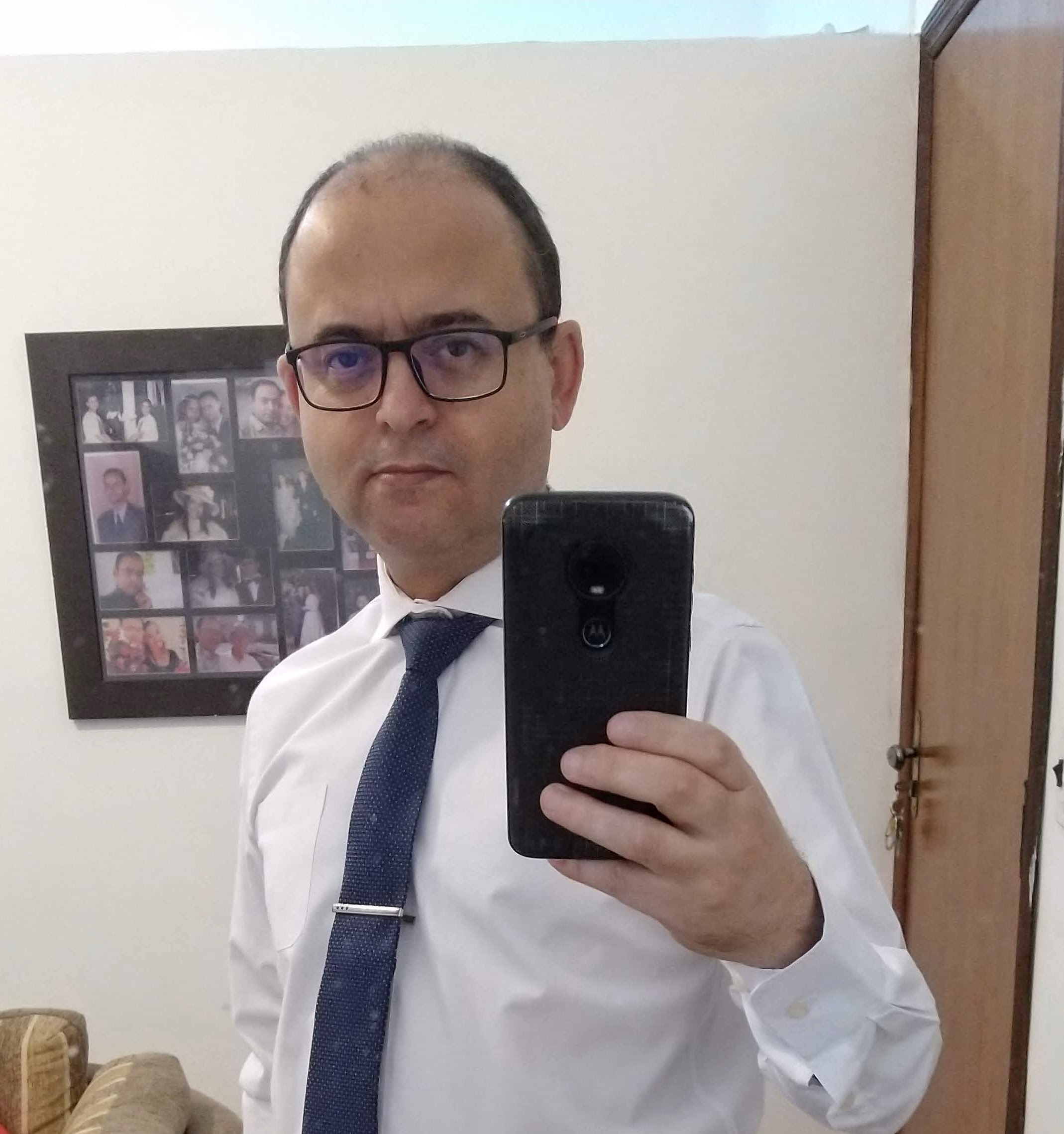 dorvalfagundes
Dear Teacher Bressmer, I ended the reading of your article, and I thought it was awesome. I'm a Brazilian customer of ProWritingAid, and this tool is essential to me. I like reading the blog's articles a lot, which are impressive, especially those about non-fiction content. I know most readers don't write a note of appreciation, but it doesn't mean they don't dislike the article. For this, I took the work of writing these words. God bless you and your family. I'm waiting for news essays of your pen. I'm sorry for my mistakes in English writing because it isn't my native language. I just achieve some excellence because I use this brilliant tool — ProWritingAid.

millie.dinsdale
I will pass this awesome feedback on to Allison, thank you for this!