ANS Abbreviation: What Does It Mean? 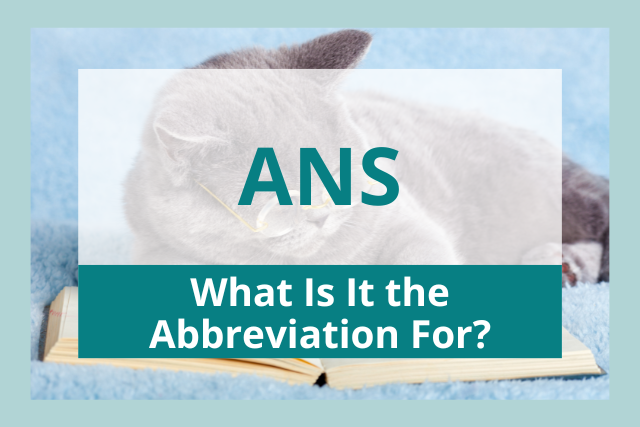 Abbreviations can be confusing, especially in the digital age. If you’ve seen the abbreviation ANS online or in text conversations, you might wonder what it means.

So what does ANS stand for?

Most commonly, ANS is an abbreviation word for answer. It can also be an acronym for other phrases, depending on the context in which it’s used.

In this article, we’ll look at all the ways people use ANS in their written conversations.

ANS is a contraction for the word answer.

There are many types of contractions. One involves taking the first few letters of the word or phrase being shortened.

ANS falls into this category, since it’s the first three letters of answer. It’s similar to the contractions UNK for unknown, SIS for sister, or BRO for brother.

Other contractions can involve using the first and last letters of the word being shortened, such as Dr. for Doctor, or replacing letters with apostrophes, such as don’t for do not.

Once you know what kind of contraction ANS is, it’s easy to guess its meaning, since there aren’t many commonly used words that begin with these three letters.

Sometimes, ANS can stand for Autonomic Nervous System, which is the subconscious part of the peripheral nervous system that regulates heart rate, blood pressure, digestion, and more. This is limited to the medical and bioscience fields.

Other possible meanings include:

To know which definition the user intended, you need to look at the context.

What Does the ANS Abbreviation Mean?

ANS is a slang term that is used to provide a response to a question or problem. It’s a shortened way of saying answer, most often used in text messaging. 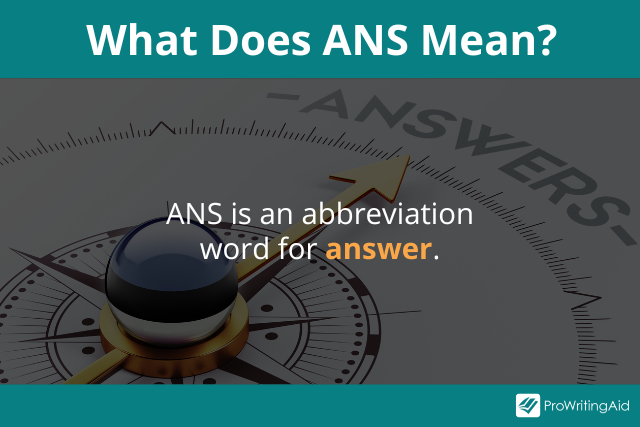 Examples of ANS in Sentences

Let’s take a look at an example where ANS is being used in a conversation between friends.

Friend 1: do you want to come to the concert next week? they have a great lineup
Friend 2: i’m not sure yet! can i check my schedule and get back to you?
Friend 1: I need to know your ans by friday
Friend 2: ok

Here’s another example of ANS in a conversation between classmates.

Classmate 1: did you do the algebra homework yet?
Classmate 2: yeah i did, why?
Classmate 1: i can’t figure out problem 5. if you know the ans, please help!
Classmate 2: ok fine, send me what you have and i can give you a hint

Finally, here’s an example of ANS being used as an abbreviation for Autonomic Nervous System.

Remember to pay attention to the context so you know exactly what the sender means when they write ANS.

ANS might be acceptable in conversations between friends, but you should only use it in very informal situations. You can use ProWritingAid’s Paraphrase Report to help reword your writing for more formal situations.