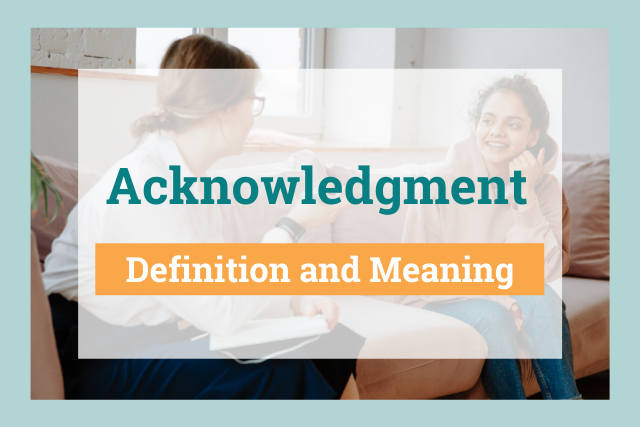 Essentially, acknowledgement describes the act of recognizing that something is true.

This article will explain the meaning of acknowledgement in more detail, and show you examples of how you can use it in writing.

The Collins Dictionary defines acknowledgement as “a statement or action which recognizes that something is true.” It is the noun form of the verb acknowledge. 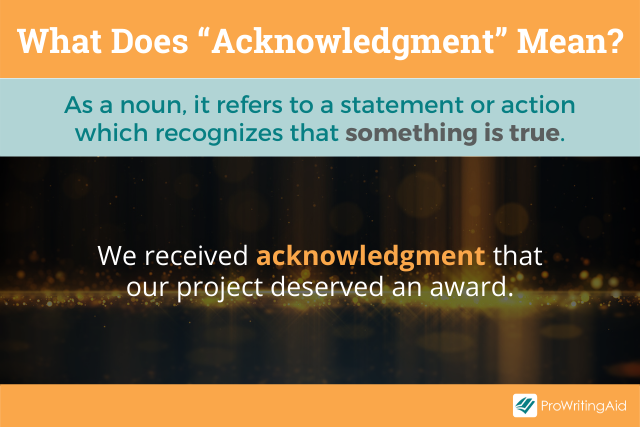 If you release a statement acknowledging something, that statement can be considered an acknowledgement.

There are three main definitions of acknowledgement.

Most often, we use the word acknowledgement to describe the act of accepting or recognizing that something is true.

For example, if you’re talking about a problem that your elected officials haven’t adequately addressed, you might say, “We need more government acknowledgement of this issue."

We also use acknowledgement to talk about owning up to a mistake. Here, it refers to the admission or confession that you did something wrong.

For example, if your friend said something that hurt you, you might say, “I just want some acknowledgement from him that he shouldn’t have said that.”

Another common use of acknowledgement is to describe an expression of gratitude, recognition, or appreciation. Here, it refers to the act of giving credit to someone who has helped you.

For example, during award ceremonies, award recipients often acknowledge the people who helped them succeed, like their managers, producers, or families.

It’s also common for authors to include an acknowledgements section in their books, where they recognize the people who helped make the book possible.

They typically name their editor, agent, and family members. 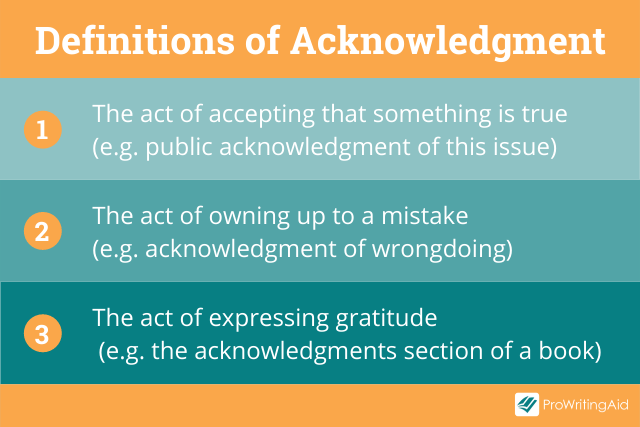 How Do You Spell Acknowledgement?

Acknowledgement is a tricky word to spell.

One helpful tip is to break the word down into its components.

Acknowledgement contains the word knowledge; you have to know about something in order to acknowledge that it exists.

Therefore, you can start by spelling out knowledge, and then add “ac” before and “ment” after.

Acknowledgement is sometimes spelt with a middle e, and sometimes without. So which version is correct? The answer may come as a relief: both spellings are acceptable! 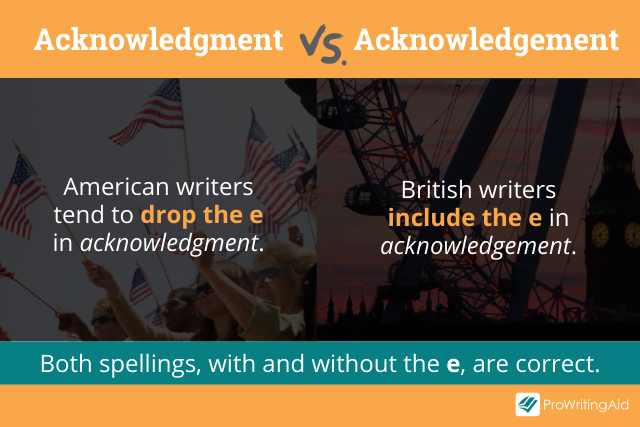 This is another example of a word where the British spelling includes an extra letter, such as canceled vs. cancelled, or color vs. colour.

However, you can use either spelling in your own writing as this is only a general trend. ProWritingAid can make sure you’re using the appropriate spelling for your audience. 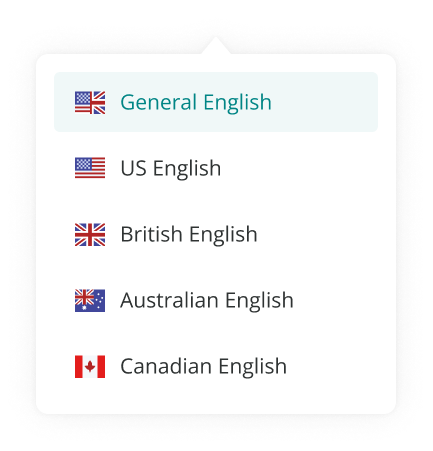 Let’s look at some examples of acknowledgement in English literature.

“But Ouyang and Lord Wang were alike. For a moment they stood there in bitter acknowledgement of it, feeling that likeness ringing through the space between them.—Shelley Parker Chain, She Who Became the Sun

“And I think maybe this is what love is. Not the absence of space but the acknowledgement of it, the thing that lives between the parts, the thing that makes it possible not to be one, but to be different, to be two.”—Rebecca Serle, In Five Years

“For now, I only wish to make a simple acknowledgement of the woman who held the power just before me. Of all of us who touched it, I feel she was the most worthy.”—Brandon Sanderson, The Hero of Ages

“The goblin bowed his great domed head in acknowledgement, then flexed his short legs.”—J.K. Rowling, Harry Potter and the Deathly Hallows

“Throughout this book we have found the narratives of those who have perpetrated violence to be ambiguous and contradictory, with both a refusal to accept moral responsibility for violence taking place alongside an apparent tacit acknowledgement of it.”—Dhana Hughes, Violence, Torture and Memory in Sri Lanka

“Fang shot a sideways glance at me, his eyes dark and inscrutable, as always. He looked back out at the water. I didn’t expect any more acknowledgment than that.”—James Patterson, School’s Out Forever

“To have privilege in one or more areas does not mean you are wholly privileged. Surrendering to the acceptance of privilege is difficult, but it is really all that is expected. What I remind myself, regularly, is this: the acknowledgment of my privilege is not a denial of the ways I have been and am marginalized, the ways I have suffered.”—Roxane Gay, Bad Feminist

“Breakups tend to fall into the category of silent losses, less tangible to other people. You have a miscarriage, but you didn’t lose a baby. You have a breakup, but you didn’t lose a spouse. So friends assume that you’ll move on relatively quickly, and things like these concert tickets become an almost welcome external acknowledgement of your loss—not only of the person but of the time and company and daily routines, of the private jokes and references, and the shared memories that are now yours alone to carry.”—Lori Gottlieb, Maybe You Should Talk to Someone

In summary, acknowledgement or acknowledgment refers to the act of recognizing that something is true, and you can spell it both with and without the e.