What is the difference between "an" and "and"? 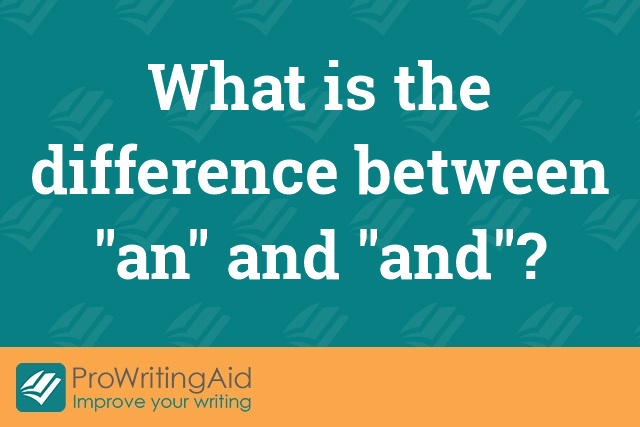 The words an and and are often confused because of their similar spelling. In this article, we explain the difference between them.

An is a determiner that means "the indefinite article before nouns with a vowel sound".

And is a conjunction that means "expressing two elements to be taken together or in addition to each other".

Let's take a closer look at each word.

An is an indefinite article. It comes before a noun and it's used when you aren't referring to one specific noun. An has the same meaning as a, but an precedes nouns that start with a vowel sound. (It's important to note that the sound of the noun is more important than the spelling. For instance, we would say an hour because hour sounds like it starts with an o.)

And is a conjunction. It can connect words that are the same part of speech, such as two adjectives (e.g. calm and steady) or two nouns (e.g. eggs and bacon). And can also connect independent and dependent clauses. You can even start a sentence with and if the new sentence is connected to the previous one.

Is the correct phrase "put an end to" or "put and end to"?

You should use "and it is" – e.g. Grammar rules are tricky, and it is easy for new writers to be put off by them.

You should use "and so on" – e.g. The table was laden with cakes, sandwiches, scones, and so on.

Never confuse an and and again. Install our free grammar checker browser extension.

Test yourself by trying out the quiz at the bottom of this page!

The definitions in this article were adapted from Wiktionary and Oxford.

Examples of an in a sentence

The students didnt know it then, but he was passing on an oral tradition that goes back centuries.
- Nothing gold can stay by Dana Stabenow

It was as if the eyelids had pricked up like an animal's ears.
- From Russia with love: a James Bond novel by Ian Fleming

Devin MacKade considered the age of twenty to be an awkward time in the life of a man.
- The heart of Devin MacKade by Nora Roberts

Examples of and in a sentence

But for him, it was a personal agenda, and he wasn't talking.
- The heart of Devin MacKade by Nora Roberts

She had the beauty, all right—and plenty more.
- Cropper's cabin by Jim Thompson

For each ecstatic instant We must an anguish pay In keen and quivering ratio To the ecstasy.
- The collected poems of Emily Dickinson by Emily Dickinson; Rachel Wetzsteon