ProWritingAid
ProWritingAid
The Grammar Guide Spelling What is the difference between "though" and "thought"?

What is the difference between "though" and "thought"? 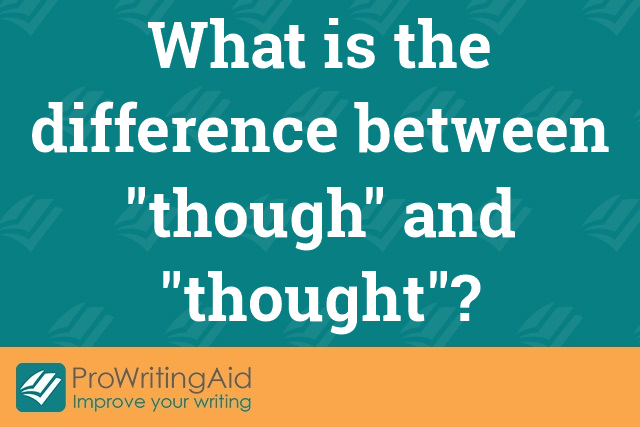 The words though and thought are often confused because they appear similar. The difference is quite easy.

Though means despite that; however when used as an adverb.

Thought is a noun. It means something created in the mind.

Out of the two words, thought is the most common.

The correct expression is 'lost in thought'. These phrases are often confused because they have a similar spelling.

You should use 'deep in thought'. These phrases are often confused because they are easy to mistype.

The right phrase is 'train of thought'. These phrases are often confused because they appear similar.

Some synonyms of though are: still, yet, although, nevertheless.

Some synonyms of thought are: feeling, theory, fancy.

Ready to test your knowledge? Scroll down and try our quiz!

Examples of though in a sentence

The room smelled like Chinese food, though none was in evidence.
- Some Girls: My Life in a Harem by Jillian Lauren

I shivered, though I wasn’t exactly sure why.
- The Battle of the Labyrinth by Rick Riordan

Got a decent red wine, though, if you feel like it.”
- Weighed in the balance by Anne Perry

I would like to have you drive me home, though, if . .
- Cropper's cabin by Jim Thompson

I did care that it was snowing outside and I might freeze to death, though.
- Touch of Darkness by C. T. Adams; Cathy Clamp

Examples of thought in a sentence

I hadn’t thought I’d packed so much.
- Some Girls: My Life in a Harem by Jillian Lauren

Art and Dave staggered off, she thought down to their boat in the harbor.
- Nothing gold can stay by Dana Stabenow

Max drooped and thought better of sharing the fact that he had also lost his sketchbook.
- The Hound of Rowan by Henry H. Neff

I thought I explained that.
- Weighed in the balance by Anne Perry