ProWritingAid
ProWritingAid
The Grammar Guide Spelling What is the difference between "belive" and "believe"?

What is the difference between "belive" and "believe"? 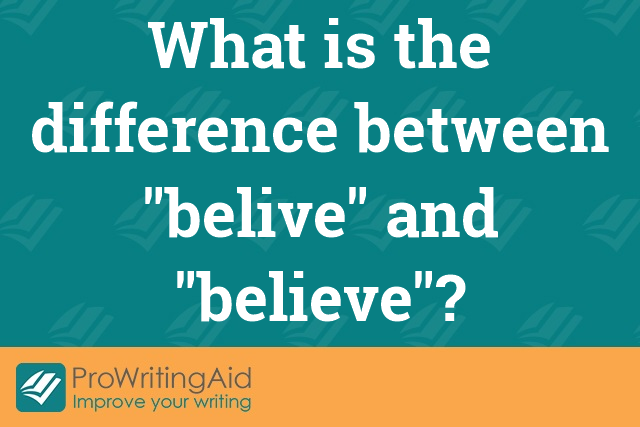 The words belive and believe are often confused because they have a similar spelling. But what is the difference?

Belive is obsolete and is hardly ever used—I've never used it before in 40 years of English writing and speaking. You almost certainly want to use believe. It appears about 4,222 times more frequently than belive.

A good way to remember the difference is that believe ends in -eve. Some people believe that Eve was the first woman.

Believe means to hold an opinion or accept something as true. Some synonyms are: credit, regard, trust, think, suppose.

Belive means to remain, stay, or abide. It’s not used very often more, except in certain dialects. In parts of Scotland, it is used as an adverb that means soon.

The correct phrase is I do not believe.

The correct phrase is reason to believe that.

Which is correct I believe in or I belive in?

The correct phrase is I believe in.

Is it believe me or belive me?

The correct phrase is believe me.

The definitions in this article were adapted from Wiktionary and Your Dictionary.

Examples of belive in a sentence

I don’t belive in it.
- Thud! by Terry Pratchett

Examples of believe in a sentence

My upbringing had led me to believe that this meant he didn’t love me enough.
- Some Girls: My Life in a Harem by Jillian Lauren

Maybe tonight was the night he'd learn to believe in magic.
- Beyond belief by Roy Johansen

It was hard to believe that it had happened.
- Cropper's cabin by Jim Thompson

I believe you received a letter that said I would be visiting you?”
- The Hound of Rowan by Henry H. Neff