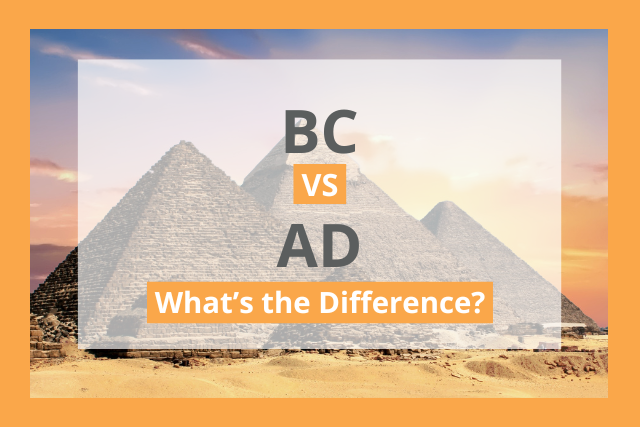 This article will give you a complete guide to the abbreviations BC, AD, BCE, and CE, and help you remember when you use each term. 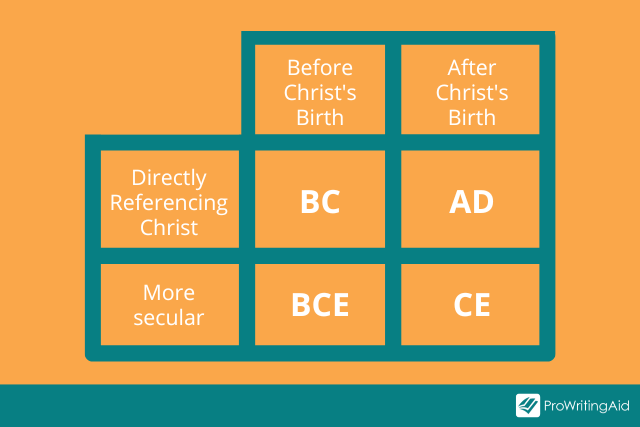 What Does AD Stand For?

The abbreviation AD stands for the Latin phrase Anno Domini, which means “in the year of our Lord.” You’ll often see AD placed before or after a number to refer to a year after the birth of Jesus Christ.

What Does CE Stand For?

The Gregorian calendar, which is the dating system we use to measure years today, was created by a pope of the Catholic Church. That’s why it marks time based on the birth of Jesus Christ.

Of course, there are many English speakers in the world who are members of other faiths, so it doesn’t make sense to mark all our calendars based on a single religion. That’s why CE is considered a more inclusive and secular way to say AD.

What Does BC Stand For?

BC stands for “Before Christ.” You’ll often see it placed before or after a number to refer to a year before the birth of Jesus Christ.

What Does BCE Stand For?

BCE stands for “Before Common Era.”

BC vs AD Meaning

BC and AD (as well as BCE and CE) make it possible for us to keep track of the year we live in, as well as when things happened in history.

Because there’s no natural “Year 0,” it makes much more sense to choose a year and start counting then. The Gregorian calendar uses the birth of Jesus as Year 0.

If you want to talk about something that happened a hundred years before Jesus Christ was born, you would write that year as “100 BC.”

If you want to talk about something that happened a hundred years after Jesus Christ was born, you would write that year as “100 AD.” 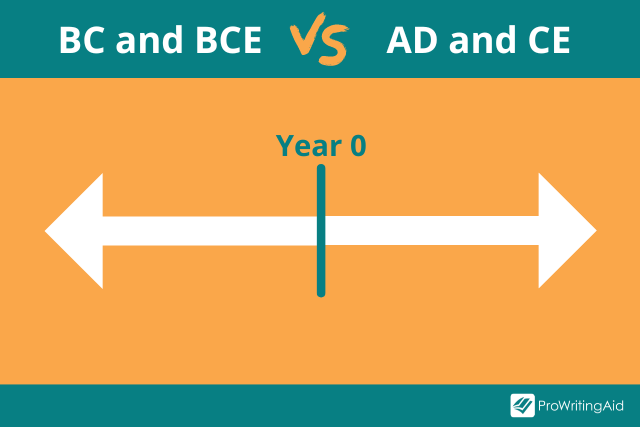 There are many other calendars apart from the Gregorian calendar, which use a different year as Year 0.

Examples of BC, AD, BCE, and CE in Sentences

“During our World History lesson that morning, Mr. Avenovich loaded up a stand-alone simulation so that our class could witness the discovery of King Tut’s tomb by archaeologists in Egypt in AD 1922. (The day before, we’d visited the same spot in 1334 BC and had seen Tutankhamen’s empire in all its glory.)”—Ernest Cline, Ready Player One

“From there, the wave of extinction moved gradually to the east, the south and the north, into the heart of the Pacific Ocean, obliterating on its way the unique fauna of Samoa and Tonga (1200 BC); the Marquis Islands (AD 1); Easter Island, the Cook Islands and Hawaii (AD 500); and finally New Zealand (AD 1200).”—Yuval Noah Harris, Sapiens: A Brief History of Mankind

“A Babylonian in 1750 BCE would have had to labor fifty hours to spend one hour reading his cuneiform tablets by a sesame-oil lamp.”—Steven Pinker, Enlightenment Now

“If the entire course of evolution were compressed into a single year, the earliest bacteria would appear at the end of March, but we wouldn’t see the first human ancestors until 6 a.m. on December 31st. The golden age of Greece, about 500 BCE, would occur just 30 seconds before midnight.”—Jerry A. Coyne, Why Evolution Is True

“The fire burned on under the cauldron of our culture, and the next doubling of our population would only take 1200 years (0–1200 CE).”—Daniel Quinn, The Story of B

Tips for Remembering the Difference Between BC vs AD

One easy mnemonic for remembering the difference between AD and BC is to think about the words before and after. BC starts with B, just like before. And AD starts with A, just like after.

The same trick works for BCE vs CE. BCE starts with a B, which means it’s the one that comes before Year 0.

If you want to make sure you’re using consistent acronyms, try running your work through ProWritingAid’s Consistency Report, which will help you catch unwanted discrepancies.

kyle.kucera1
Thank you for your comment! In the article above, we did mention what 'AD' stands for. "The abbreviation AD stands for the Latin phrase Anno Domini, which means 'in the year of our Lord.' You’ll often see AD placed before or after a number to refer to a year after the birth of Jesus Christ." We hope this helps!