Avoiding He Said & She Said

"What’s for dinner tonight?" he said.

"No, Saturday is my day. Friday is your day," he said.

"Seriously? We’ve been together for 3 years, and you always cook on Fridays," she said.

"He said" and "she said" are stilted when overused

What does the above interaction between these two people tell you? Not a whole heck of a lot, right? It’s a smattering of boring conversation segued by repetitive use of dialogue tags.

Do you really need to use "he said" and "she said" after every bit of dialogue? Actually, no. You have other options like not using a dialogue tag at all, or showing who’s talking by action outside dialogue. Let’s look at each separately.

Only use dialogue tags every three or four lines

"What’s for dinner tonight?" he said.

"No, Saturday is my day. Friday is your day."

"Seriously?" she said. "We’ve been together for 3 years, and you always cook on Fridays."

That’s not nearly as redundant and boring as the first example. But it still leaves a lot to be desired, doesn’t it? The next bit of advice will liven up any dialogue without overusing dialogue tags.

Use action to show who’s talking

"What’s for dinner tonight?" he said as he sat down at the table.

She put her finger in her book and closed the cover. "What do you feel like fixing?"

"Yes, it is. It’s Friday." She pointed to the calendar hanging on the refrigerator. "Friday is always your day."

He got up to stand in front of the calendar. "No, Saturday is my day. Friday is your day."

"Seriously?" She rolled her eyes. "We’ve been together for 3 years, and you always cook on Fridays."

Now the above scene tells us a little about each character. He’s looking right at the calendar, but she’s back there rolling her eyes. Seems like she’s more than a little annoyed with him for some reason. And she clearly doesn’t want to fix dinner.

This time your reader wants to know more because you’ve introduced tension into the bit of boring dialogue. The two characters are obviously on the cusp of an argument, but we’re not sure about what yet. It’s certainly something more than whose turn it is to cook.

Use dialogue to tell your reader who’s talking

What if in a scene between the man and woman from above, one person says:

That might be enough of a sign that the woman is talking. Or if she says she needs to visit the ladies’ room, that’s also a good sign. Sometimes your dialogue will point to who’s doing the talking.

"You have a girlfriend yet?" she said.

There was one "she said" in the entire above exchange, but you clearly knew who was talking.

Another way to avoid overusing "he said" and "she said" is to give your characters distinctive enough voices so it’s clear who’s talking. We have a more in-depth article "Writing Character Voices: Channeling Your Inner Multiple Personalities" you should read.

What’s your favorite way to reduce the redundant "he said" / "she said" dilemma? Let us know in the comments below.

The Internet's Best List of Clichés
Improve Your English Grammar With These Sites
What are Phonemes, Graphemes, and Digraphs?
Let’s Get Possessive
In Defense of Passive Voice
What are simple, compound, and complex sentences?
How to Write Dialogue in a Narrative Paragraph
"Which" or "That": Know When to Use Each
The Best Places to Find Free Grammar Help Online 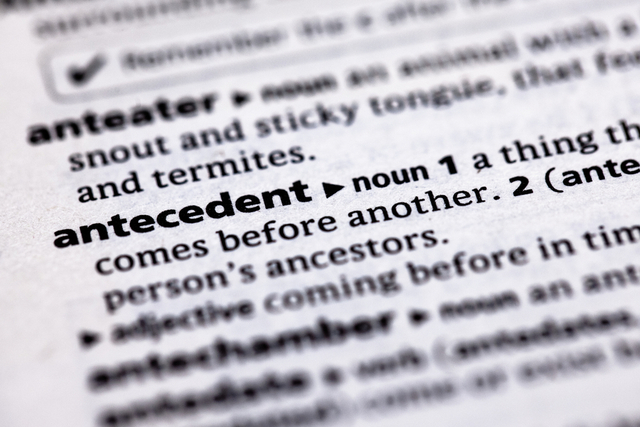 Grammar Rules
Everything You Need to Know About Antecedents