How to Write a Pulse-Pounding Thriller 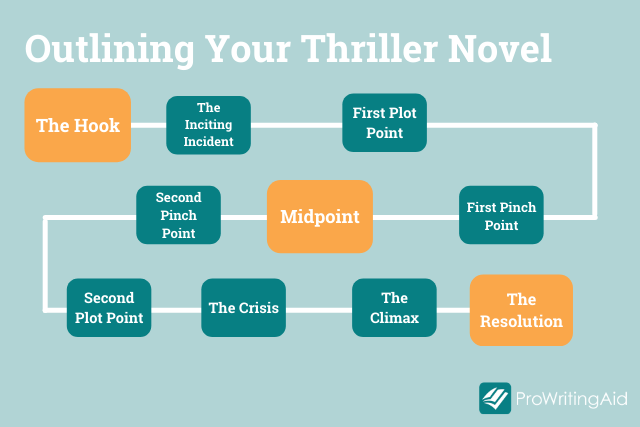 The thriller’s core emotion is excitement. A thriller novel is fast-paced and develops around what happens after you’ve established danger. Plan your thriller to keep moving and excite your reader.

Elements of a Thriller

Before you plan your thriller, you should know the basic elements readers expect within the genre. Plan to include these elements as you think through your storyline.

Build suspense by controlling information, eked out in small portions as the story progresses. The story has a central storyline to answer one question—like, will the hero save the world and defeat the antagonist? You control the suspense by managing when and how you release information. Those small bits of information sustain your reader’s interest.

Think of your “hero” as the protagonist. Often, thriller protagonists are not heroic; they are ordinary people overcoming odds stacked against them. They are often an unassuming person, ill-equipped and unprepared, attempting to save the world.

Malicious and cunning, the villain is the force that provokes and aggravates the hero. Introduced with clear intent, the villain’s motivations create the dilemma for the hero. Wise, with their own sense of morality, the villain’s personal morality internally justifies their evil. The villain is intent on their purpose and does not listen to reason.

Fill your thriller with precarious challenges for your hero. Each time your hero thinks they are on the right path, something changes their direction. Twists are the meat of the suspense that keeps readers wondering what will happen next? And then the next thing is worse than the one before. 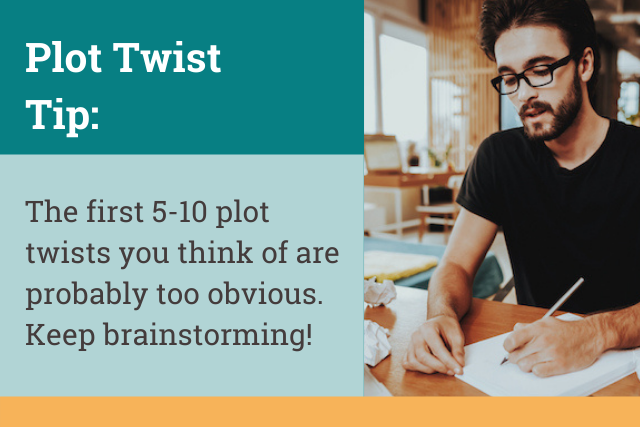 Read our guide to crafting a plot twist your reader will never suspect.

Put your protagonist under pressure with a dastardly deadline that’s coming soon. A sense of urgency to conquer the evil creates page-turning tension for readers.

Not always, but often, a secondary character supports your protagonist in their quest to overcome evil.

Blessed with an alternate skill set, the sidekick may act as a sounding board, provide emotional support, get themselves into trouble so the hero must rescue them, and provide comic relief.

The sidekick may be a mentor, romantic interest, friend, or helper. They offer the reader insights into the protagonist’s motivations, strengths, and weaknesses.

Build chapter endings around questions about what will happen next. Build cliffhangers by stopping the action of a conflict, before the moment of conclusion. Then switch to another scene. Author James Clavell was master of the cliffhanger.

Wondering how to write a cliffhanger well? We examine the ending of Stieg Larsson's The Girl with the Dragon Tattoo to find out.

Thrillers build toward the end and it’s a big one. With just moments to spare, the hero faces their biggest obstacle and the reader learns all of the remaining information that’s been kept a secret.

It feels like the villain will win until at last the hero summons courage and initiative to conquer.

How to Plan Your Novel

Planning your storyline before your write will help you build tension with ever increasing stakes for your hero.

Journalist Sarah Weinman distilled the essence of the thriller in her piece in the Wall Street Journal on Eric Ambler’s A Coffin for Dimitrios:

...taking an ordinary man and dropping him in the middle of extraordinary events that will put him in danger, test his mettle and reveal his inner survivor.

The thriller genre contains a number of sub-genres. You have a wide range of choices. Planning software StoryGrid names 12 sub-genre examples:

Though a thriller is a plot-driven story, your characters bring the story to life.

Download ProWritingAid's guide to crafting characters that readers connect with.

Once you have your cast of characters, outline the high points of the story. Then you can create scenes and chapters that lead from one story point to the next.

For this example, we’ll use the three-act structure and a book length of approximately 80,000 words.

Here’s a visual for each percentage point. You can keep this graphic handy for quick reference as you write and edit: 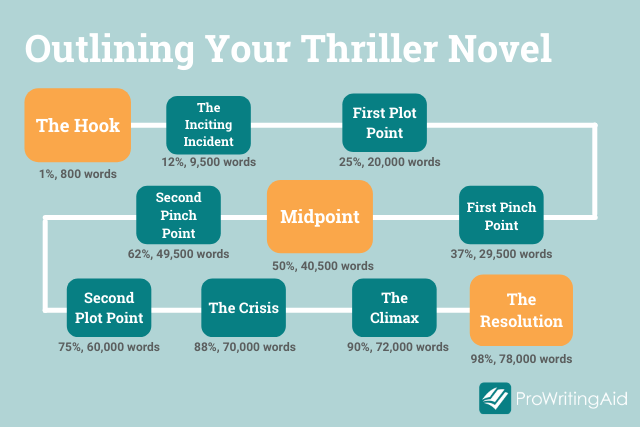 Now you’ve got an overview, let’s get into details.

In the first act you introduce your protagonist and their internal and external goals. And, you introduce the malevolent force your hero must overcome.

Grab your reader’s attention. Plunge them into the story by introducing your protagonist and getting the reader to care about them. This is a good place to introduce your protagonist’s special skill that seemingly has nothing to do with what lies ahead.

Enter, the menace. In a thriller, the crime that indicates there’s a master antagonist appears here. The crime gives rise to your protagonist’s desire to stop the menace.

Now it’s time for your protagonist to take on the chase. Depending on your subgenre, they may be assigned to capture the menace or take on a personal commitment to conquer the antagonist.

The middle of your thriller is filled with challenges, conflicts, and new directions. Your protagonist prepares for the final conflict.

They’ll chase a trail of clues to uncover new information. This is how you control the release of information for the reader to build suspense. Your protagonist may learn new skills, get leads, find false clues, and ultimately make a plan to stop the antagonist.

The middle is also the place to build any subplots based on your protagonist’s inner needs and goals.

Your protagonist and your reader get a view of the antagonist’s threat.

Expand on the threat to the protagonist. Your hero begins to understand the amount of threat in the antagonist’s plan. They feel the threat, and so does your reader.

At the midpoint, your protagonist realizes their original plan isn’t enough. He or she may feel they’re making progress and then discover the antagonist has the upper hand. Or they may feel overwhelmed, tasked with too great a challenge, and unable to fulfill their plan.

Either way, the protagonist has to rethink what they know and change direction with different actions in order to catch the antagonist.

As the story continues from the midpoint, your protagonist’s new plan, based on new information, helps them examine the current situation in a new light. Then they move from the reaction to the sense of failure at the midpoint to creating and taking action on their new plan.

The antagonist’s threat becomes clearer. The protagonist, and your reader, understand the full scope of what lies ahead in order to stop the menace.

You can complicate matters by putting the protagonist’s inner and outer goals in conflict. Once again, you’re raising the stakes of what could happen if your protagonist fails.

Also, your protagonist can battle inner doubts, fears, and false beliefs. Your protagonist is in direct confrontation with the villain and it’s all around bad for your hero. 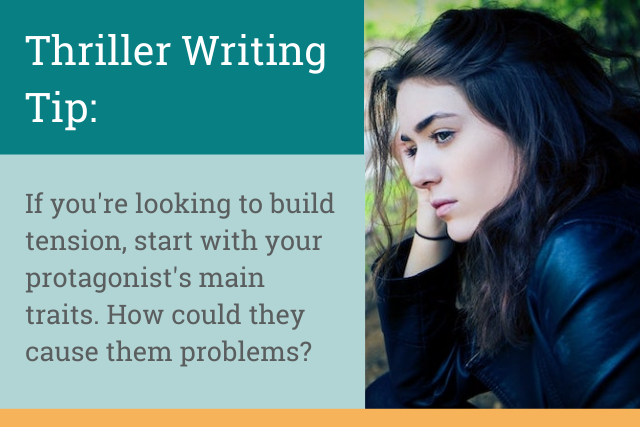 Are your scenes not gripping enough? Learn how to build story-long dramatic tension to keep readers turning pages in this guide.

Your protagonist and antagonist have their final showdown. As you’ve dripped information slowly through your story, now your protagonist will find the last missing piece.

Your protagonist must choose between succumbing to fear and allowing the antagonist to win or find the courage to meet the antagonist in a final showdown.

They comprehend what they must do to conquer the antagonist, and overcome internal fears. They arrive at the solution and learn a life lesson at the same time.

The protagonist and antagonist face off.

Create a moment where if feels as though the antagonist will win. Cliffs, caves, burning buildings, dark basements, secret labs—these are the settings often brought into play here as the antagonist has their way with your hero.

Now the protagonist must use his or her combined skills to not just survive, but defeat the antagonist.

You finally answer the question—will the protagonist stop the antagonist before he or she commits any more crimes/hurt more people? And the answer is: yes they will.

Show the reader what life is like now that the threat is removed. Your protagonist has come to terms with their inner struggle. Show the reader how he lives with his newfound inner strength.

Keep Your Reader in Suspense

A thriller holds your reader in suspense until the climax. Your imagination, attention to detail, and adherence to reader expectations will result in a novel that keeps readers on the edge of their seats.

Are you ready to write your thriller novel? Download this free book now:

professorjennifer
Thank you so much! I have really struggled at plotting my thrillers, and I've read countless books and articles on the subject, but I have NEVER read something so straightforward and helpful! And that diagram and the percentages are so great! I sincerely appreciate this information to help me organize my writing idea. Again, thanks a million and happy writing!

kyle.kucera1
Thank you so much for your comment! We're so glad that this article could help you with your writing! We appreciate the feedback. Happy writing to you as well!