ProWritingAid
ProWritingAid
The Grammar Guide Spelling What is the difference between 'desert' and 'dessert'?

What is the difference between 'desert' and 'dessert'? It’s all too easy to use the wrong spelling when you’re writing. So how do you remember which one you should use?

The short answer is that “dessert” refers to a sweet treat eaten at the end of a meal, while “desert” means many other things, none of which are edible.

Read on to see examples of each word, as well as tricks for remembering the differences between desert vs. dessert.

What Does the Word “Desert” with One S Mean?

There are multiple possible meanings for the word desert.

The most common meaning is a noun that means “arid land with little or no vegetation.”

This word is often used to describe hot, sandy places, such as the Sonoran desert or the Sahara desert. 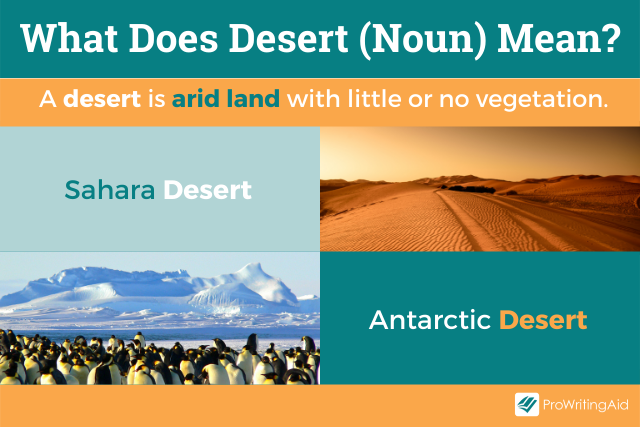 Another common meaning is a verb that means “to leave someone who needs you.”

You can desert a person, place, or group. A soldier is considered a “deserter” if he or she leaves the military without permission. A building is said to be “deserted” if all of the occupants leave. 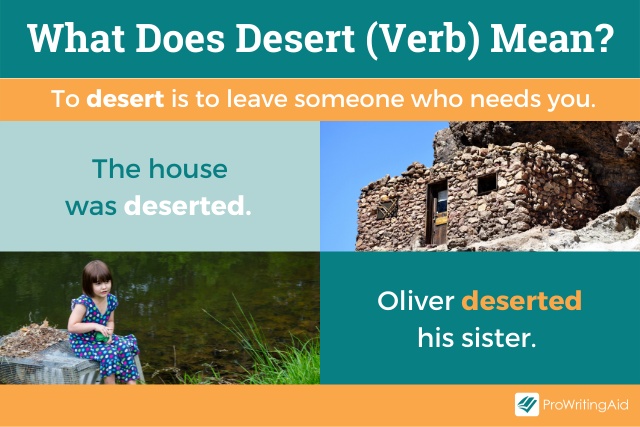 A less common meaning is a noun that means “a deserved consequence.” Someone can receive their “just deserts” when they do something wrong and get punished for it.

What Does the Word “Dessert” with Two Ss Mean?

It’s much easier to remember what “dessert” with two Ss means, because there’s only one possible definition.

The word “dessert” refers to a sweet dish eaten as the last course of a meal. For example, you might have ice cream or chocolate cake for dessert. 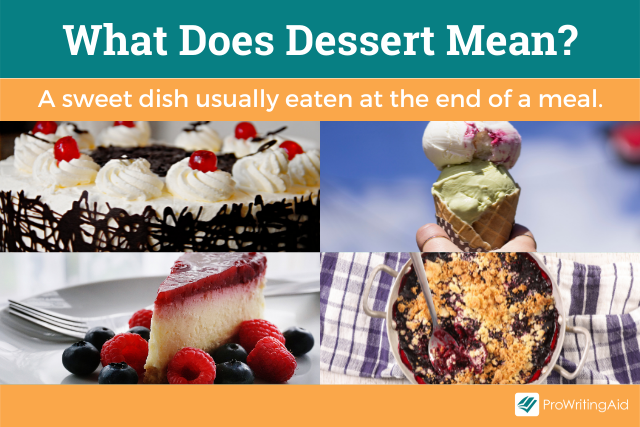 What Are Some Examples of the Words Desert and Dessert in Writing?

Here are some examples of each word from books and articles.

Example Sentences with the Noun “Desert,” Meaning “Arid Land with Little or No Vegetation”

“The spice exists on only one planet in the entire universe. A desolate, dry planet with vast deserts.” (Dune by Frank Herbert)

“Within a couple of decades, the Weather Makers believe, the Sinai could be transformed from a hot, dry, barren desert into a green haven teeming with life: forests, wetlands, farming land, wild flora and fauna.” (The Guardian)

“As dryland ecosystems experience stronger heat waves and droughts, scientists have wondered how climate change might affect the hardy plants that thrive in harsh deserts or dry mountains.” (Scientific American)

Example Sentences with the Verb “Desert,” Meaning “To Leave Someone Who Needs You”

“Photos from Paris, London, New York, Berlin, and Milan show deserted squares where in previous years there would have been crowds of thousands.” (Insider)

“Once a soldier is classified as a deserter, the soldier’s name is added to a national crime database.” (Wired)

“I think we are well advised to keep on nodding terms with the people we used to be, whether we find them attractive company or not. Otherwise they turn up unannounced and surprise us, come hammering on the mind’s door at 4 a.m. of a bad night and demand to know who deserted them, who betrayed them, who is going to make amends.” (Slouching Towards Bethlehem by Joan Didon)

Is it "Just desserts" or "Just Deserts"?

Here are some example sentences with the noun phrase “just deserts,” meaning “a deserved consequence”.

“Use every man after his desert, and who should ’scape whipping?” (Hamlet by William Shakespeare)

“Did the world always mete out just deserts?” (The Talented Mr. Ripley by Patricia Highsmith)

Example Sentences with the Noun “Dessert,” Meaning “A Sweet Dish Eaten at the End of a Meal”

“We’re well and truly into apple season now, and what better way to celebrate this crisp fruit than in a baked dessert?” (Independent)

“The cost of serving a house-prepared line of desserts includes employing a pastry chef and dedicated space in the kitchen to the craft.” (The Washington Post)

“I’m not a vegetarian! I’m a dessertarian!” (Something Under the Bed Is Drooling by Bill Waterson)

What Tricks Can I Use to Remember When to Use Desert vs. Dessert?

Remember Examples with One S and Two Ss

This sentence is a handy mnemonic: “Strawberry shortcake is a dessert.”

If you remember that “strawberry shortcake” has two Ss, you can remember that you need two Ss when you’re talking about eating dessert.

Here are some other examples you can remember to help you with “desert” with one S:

“The Sahara is a desert.” In this case, remember that “Sahara” has only one S.

Or you could run your writing through ProWritingAid’s Realtime Report which will let you know when you have mistaken the largest landmass in the world without rain (desert) for a sweet treat (dessert).

“The soldier deserted his post.” In this case, remember that “soldier” has only one S.

"Just deserts means getting what you deserve." In this case, remember that "deserve" has only one S. 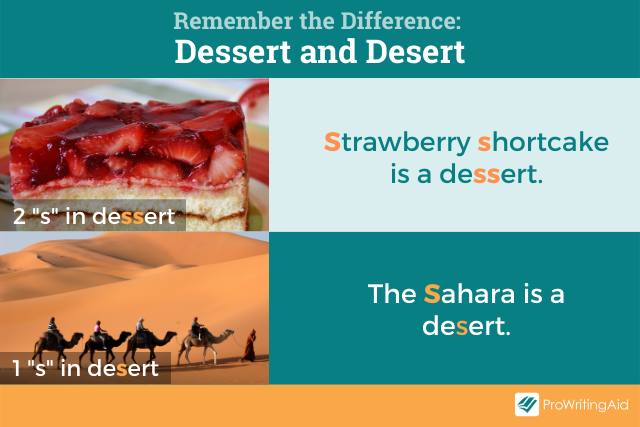 Remember that Desserts Is the Opposite of Stressed

Another trick is to remember that stressed is the same as desserts spelled backwards.

When you’re stressed, you might eat sweets to relax and decompress, so it’s like the two words are opposites. That’s how you can remember that eat dessert has two Ss. 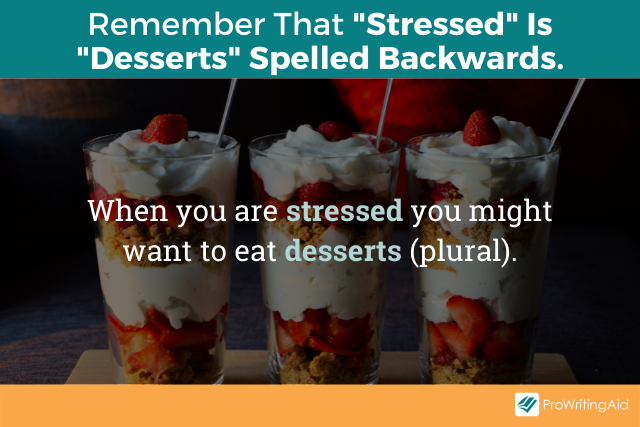 What are your favorite tips for remembering the difference between desert vs. dessert? Let us know in the comments.

Examples of desert in a sentence

Though I doubt shock therapy patients get tiramisu for desert."
- Breakfast in Bed by Robin Kaye

The first hint of dawn could be seen, outlining the rough hills of the western desert.
- Final Assault by Stephen Ames Berry

Manny Leiber gazed off at the imaginary desert.“I’ll
- A Graveyard for Lunatics: Another Tale of Two Cities by Ray Bradbury

It’s like standing in the middle of the desert sprinkling water around with a cup.
- The Elephant vanishes by Haruki Murakami

He tried to swallow, but his throat was as dry as a desert.
- The Paris Option by Robert Ludlum

Examples of dessert in a sentence

Dessert was the frozen eye of a scream bird.
- The Source of Magic by Piers Anthony

This weird and wonderful dessert will become one of your new BFFs!
- Hungry Girl 1-2-3: The Easiest, Most Delicious, Guilt-Free Recipes on the Planet by Lisa Lillien

For dessert he had a Sugus sweet.
- The shadow of the wind by Carlos Ruiz Zafón; Lucía Graves

And he probably got his neck broken for his trouble, just about the time I was having dessert.
- Dead Center by David Rosenfelt

A chocolate dessert fondue sat on the counter all ready to go.
- Breakfast in Bed by Robin Kaye