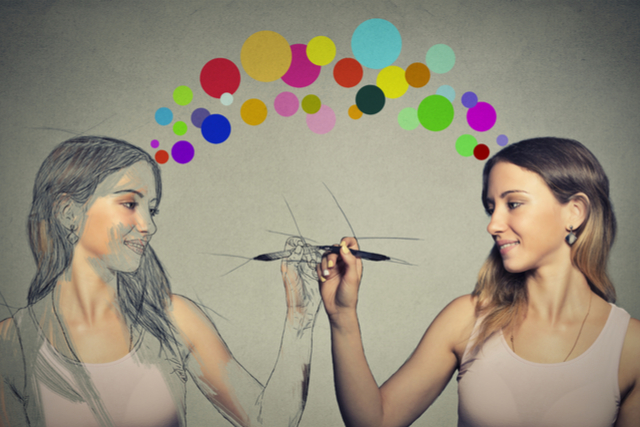 In his seminal work on characters, Orson Scott Card says that people "turn to fiction in order to know people better than they can ever know them in real life. If your story tells them nothing more about people than they already know, you’ve let your audience down."

Words to live by when you’re creating characters. Start with real-life people you know, but make it your jumping-off point. Let’s look at what that means.

We all do it; we use real people from our lives on which to base characters. Can you really know another person that deeply, though? Down to their soul, do you know what your partner, your best friend, or your favorite sibling believes, has done, and has suffered? Not likely. You can guess, but to create a three-dimensional, living, breathing character, you need to go deeper than you truly know someone.

So, start with a real-life person—yourself. Plumb all your deep, dark places and put yourself in the shoes of your main character. You are a well of inspiration. Say, for example, your character is in high school. You, too, were in high school, and surely you remember how mean the queen bee girls were and that crush you had on the star football player. Use your memories—the dialogue, what scared you, what thrilled you, and what you saw, smelled, tasted, and touched.

At some point, your personal well will run dry. So how do you keep creating characters that are true and believable after you’ve scavenged every bit of good stuff from your own life?

You imagine what you would do in your character’s place. But, you say, what if your character does something horrible you can’t imagine doing yourself? Use similar feelings. If you’re writing a character who commits murder, something you could never do, think about a time when you felt intense anger. When you’re that angry, cold, hard revenge sounds so good, doesn’t it? But you kept yourself from taking the next step—physical harm. Can you imagine how your character might not?

As a writer, you could always interview someone to get a feel. But beware that this will skew your story. If you talk with a murderer, you get the story he or she wants you to hear, the pieces and bits they want to portray, not everything. So again, use real people as a jumping-off point.

Writers are full of wonder, right? We want to know why a character does something and then uncover the scars and broken places. You can use your sense of wonder to create amazing characters.

Consider how using the "what if" tool can help you. Say you’re standing in line at the movie theater, waiting to see the latest blockbuster superhero movie. You notice a young boy who doesn’t look old enough to see this PG-13 movie, and you wonder what’s his story. What if his parents don’t know he’s there; maybe he told them he was spending the night at a friend’s house. Or what if his parents are dead and he’s in foster care? And his foster parents are heroin addicts and have no clue what the children in their care are doing.

That’s a little melodramatic. So, what if the boy is actually 13, but tiny for his age? His friends think it’s funny to pick him up and cradle him like a baby. He’s tired of it and is reaching a boiling point. What if the movie he’s seeing is Captain America, and the boy identifies with how the US military rejected Captain America for his small stature? Now the boy plans how he can overcome his physical size like the movie hero does.

Now go deeper. Throw in a twist. Let’s say there’s a reason the boy’s family wants to keep him small. Maybe the mother has Munchausen Syndrome, or the parents are thieves by night and the boy is adept at squeezing his body through security laser beams. Surely you can come up with something better, which leads to the next point.

Who else must be there? You have a 13-year-old boy, his friends, and parents. There may be siblings, relatives, and students and teachers at school. He has an entire world populated by characters with whom he interacts. If he rides the bus to and from school, he must know the bus driver. Maybe it’s a mean old woman with a wart on her chin and all the kids call her "Mrs. Warthog." Too simple. Go deeper. Maybe the bus driver is a man who got canned from his corporate job, and in desperation took a bus driver job. He understands what it's like to feel belittled and sees himself in the boy. There are certainly others, so keep asking yourself "Who must be there?"

The boy has to live somewhere. Are there neighbors? How do neighbors fit into the story? Maybe the boy lives at the beach and he becomes friends with a tourist. The tourist doesn't speak English, and the boy helps him communicate and get around. Or maybe the tourist has children who are cruel and make fun of the boy, and he resents their presence in his town. Better yet, maybe one of the tourist’s children is a lovely 13-year-old girl, and the boy falls hard for her.

Finally, ask yourself "Who was there?" This helps you get into back story. For example, let’s say the boy had grandparents who have since passed. He was close with his grandfather and learned about life, girls, school, etc. from him. While grandfather is not present in the story, his memory plays a big role in how the boys responds to and behaves in situations.

Or maybe the grandmother never accepted the boy’s mother, and her contempt and disregard color the way his parents interact. There’s always tension in the home because his mother never feels like she’s good enough or accepted.

Have you ever looked at a picture online or in a magazine or newspaper and immediately thought, I wonder who lives there? Why do they live there? What are they afraid of? What do they dream about? Cull your amazing imagination, add a drop of reality from your own life, and then twist things around and go deeper. Play with your sense of wonder and let it go wild. You’ll get your best characters by asking "what if" and "I wonder."

Drop us a note in the comments below about the best character who came to you out of the blue. Was it from something you saw that made you wonder, or did they just pop into your mind, walking, talking, and making themselves at home?

marlenehstack
I sit by myself, yet not alone. I'm left wondering if you meant to die? It's been twelve years of learning how to live again without you. Yes I find myself blessed indeed for I found I am capable of loving again. He is your exact opposite, I no longer question how can it be. I've come to realize how determental you were for our children and your opinion of me.So eloquently you instilled in them thier mother's love was not reality. Yes I thank whatever is in me, to be blessed with love for another man.Eyes open I'm proud to be the women who loves another so incredibly different is he.

cheyrlsterling
"What if" is one of the writer's most valuable tools. Play with it with abandon. Write it on the walls like graffiti. Shout it from roof tops. You will be rewarded immeasurably.

burb2872
Don't be in a rush to write. LIVE with your characters for a long time before you hit the keys. They will give you dribs and drabs of themselves over time as real people do. If you want the full "confession", wait for it.

mangala9krishnan
Loved the idea of using real life characters. Another interesting facet is trying to mix and match natures of people you know. The arrogant nature of relative can be sometimes added to a lonely character giving a different meaning for his loneliness. Also interchanging the natures of couples with others or pairing them differently leads to interesting possibilities.