The Grammar GuideVerbsWhat is a sentence fragment?

What is a sentence fragment? 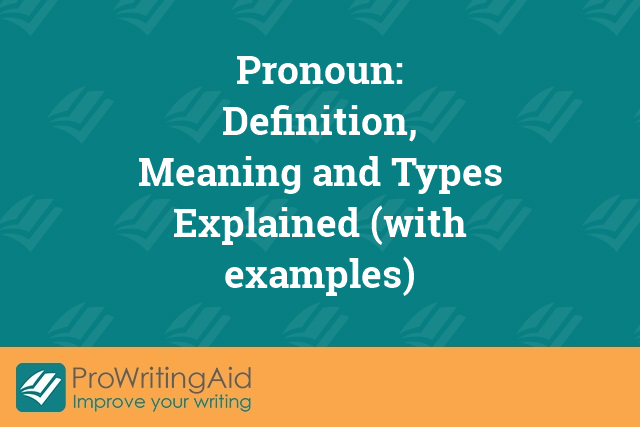 A sentence fragment is an incomplete sentence that cannot stand by itself and does not make sense on its own.

Usually, the sentence is missing a proper subject-verb relationship.

For example, "In France, just before D-Day and after the Americans had joined the war." is an incomplete sentence. It describes to the reader the time and place, but there is no subject-verb relationship and it is therefore unclear what the writer means. 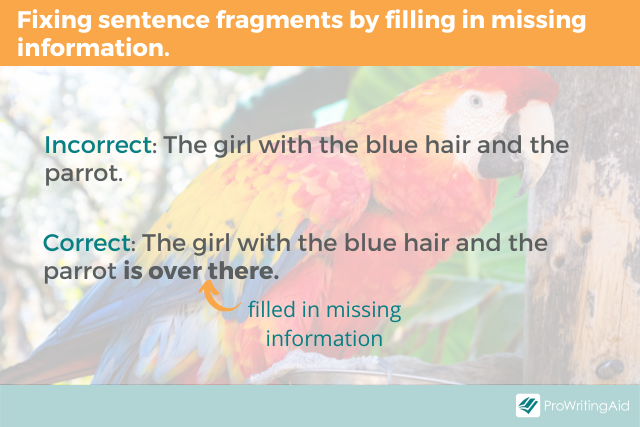 I enjoy doing jigsaw puzzles; I find it soothing. When I do them now, I don’t look at the image on the box to help me along. I like the challenge of finding my way and the satisfaction of revealing the complete picture at the end.

Those individual pieces don’t tell me much about the whole picture, but each one is essential to its creation.

Sentences are a bit like puzzles. You need to have all the pieces of the sentence, not just individual fragments, in order to present a complete thought. 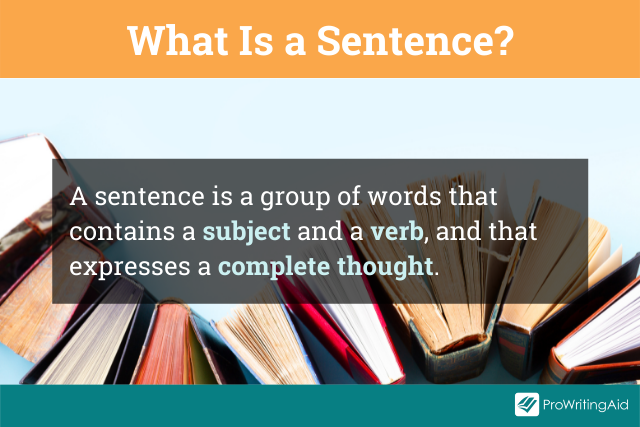 What Is a Sentence?

A sentence is a group of words that contains a subject and a verb, and that expresses a complete thought. It may have additional elements as well, but in order to earn its sentence credibility, it must have those three elements.

While you don’t have to be an expert in grammatical terminology to understand how a sentence works—and when it doesn’t—knowing these sentence-related terms is helpful.

What Makes a Complete Sentence? 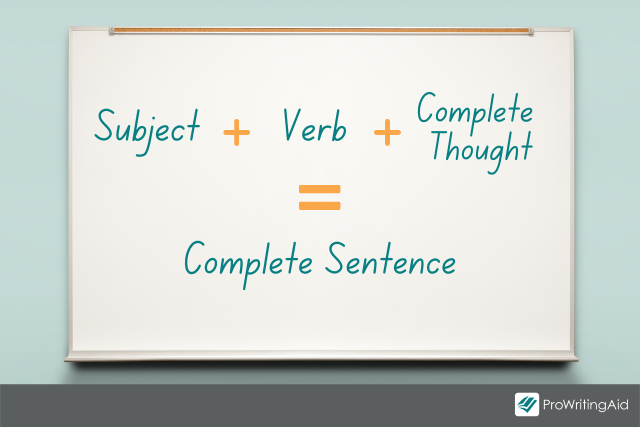 The sentence expresses a complete thought because by the end, we have all the information we need to understand what has happened with that subject and verb. This group of words makes sense and can stand on its own. It’s independent.

What Is a Sentence Fragment?

A sentence must be (or include) an independent clause to be complete.

When one element of an independent clause (the subject, verb, or complete thought) is missing, you’ve got an incomplete sentence or a sentence fragment.

But hang on—what's an independent clause?

What Are Clauses and Phrases in Sentences? 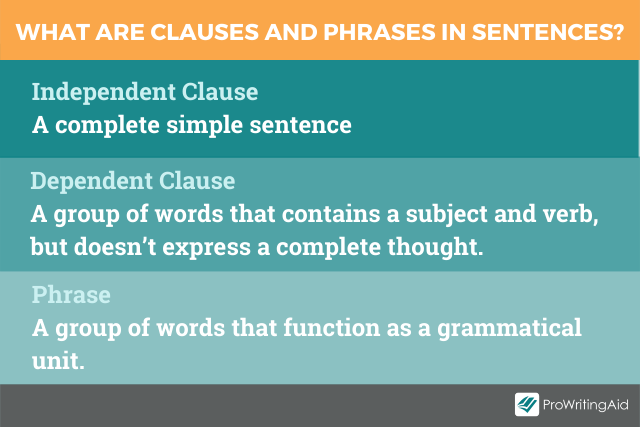 Phrase: Phrases are groups of words that function as a grammatical unit. They may include nouns and verbs, but those nouns and verbs do not have the subject + verb relationship and do not express complete thoughts. Check out this post for examples of different phrases. Phrases cannot stand as complete sentences on their own.

When they’re on their own, both dependent clauses and phrases can be sentence fragments.

What Are Some Examples of Sentence Fragments?

Just as the single puzzle piece (or fragment) needs to be joined with its “sibling” pieces to create a full picture, a sentence fragment also needs to be connected to the other required elements of a sentence to achieve completeness.

And just as single puzzle pieces don’t reveal the entire image they are a part of, a sentence fragment lacks information and rarely makes sense on its own.

See if you can tell what element is missing from each of these sentence fragments.

In the first example, the subject is missing. The fragment includes the verb “going,” but doesn’t establish who or what is going to the store.

In the second example, the verb is missing. The fragment includes a subject, the “dog, but doesn’t establish what action or state of being that dog is performing. We are left wondering, “what about the dog under the car?”

In the third example, the fragment includes a subject, “they,” and a verb, “left,” so we know who did what. However, the fragment leaves us with a question: what happened because they left early?

How Do You Recognize a Sentence Fragment? 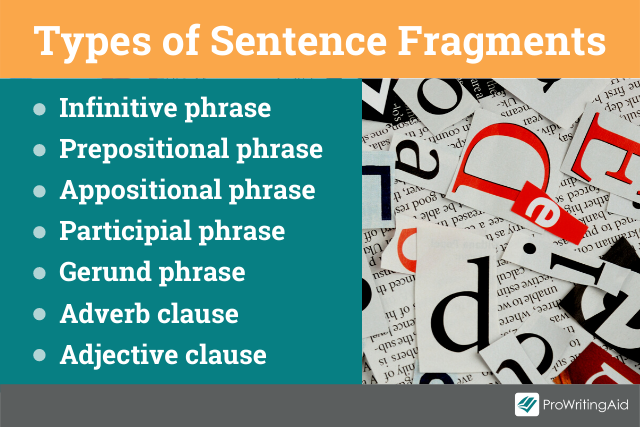 While there are many ways to create sentence fragments, some errors are more common than others. Be on the lookout for those errors in your writing so you can avoid or edit them when you read over your work.

Clauses that Start with Subordinating Conjunctions

Subordinating conjunctions are words or phrases that start a dependent clause, and signal that these dependent clauses have a relationship with the information in a sentence’s main (or independent) clause.

This relationship could be cause/effect; comparison/contrast; conditions/possibilities or shifts in timing. However, if left unattached from that main clause, the dependent clause that begins with a subordinating conjunction is a fragment.

Each of the following dependent clauses starts with a subordinating conjunction.

I think we have an emergency here! Are we hearing about a brutal crime?

These fragments are killing me—and maybe the subject of them too! 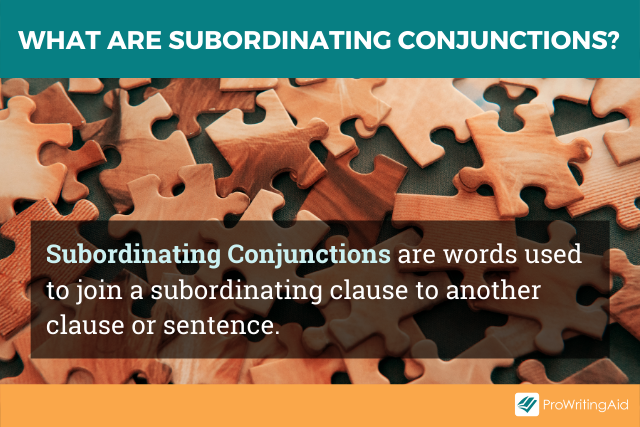 Well would you look at that! Our terror was unjustified. Those fragments did not give us the full picture. What a relief!

TIP 2: You can also remove the subordinating conjunction to make your dependent clause complete. For example, “He had sharpened his knife.” Is a complete sentence. The removal of the word takes away from the cause-effect relationship in the clauses, so if the relationship is important, this method of correction is not the best option.

Clauses that Start with Relative Pronouns

Relative pronouns are pronouns that start a relative clause. Isn’t that a helpful definition? It’s like asking “what’s a definition” and being told “it’s a group of words that defines something.”

To clarify, these are relative pronouns:

They can answer the questions:

When a clause begins with a relative pronoun, it will be a dependent clause (a fragment) and will lack a complete thought—unless the sentence is asking question and has a question mark at the end.

(The relative clause “who ate five pizzas” tells us more about “the guy.”) 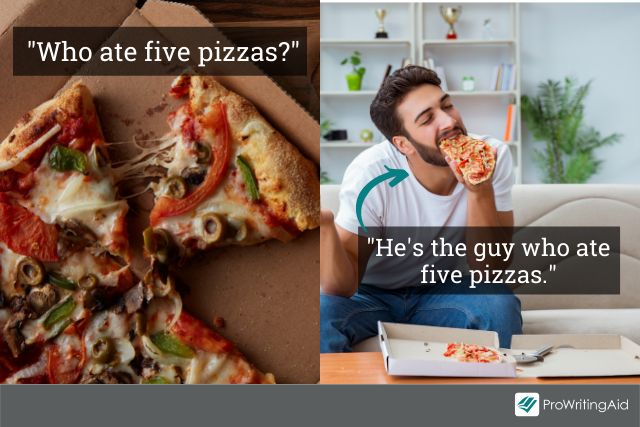 Fragment: Which is my favorite.

Corrected, complete sentence: The black shirt, which is my favorite, is on sale.

(The relative clause “which is my favorite” tells us more about “the black shirt.”)

In the examples below, the phrase-fragments are in bold.

Whichever phrase you choose to start the sentence with will have more emphasis, so decide whether you want to highlight the heat or the pool.

Corrected version: I found something under the bed.

Corrected version: Running as fast as I could, I tripped and fell.

TIP 3: Don’t let size fool you! Fragments can be long, and complete sentences can be short! For example,

The girl with the red hair and green eyes who sat in front of the class.

Fragment! What did the girl do? There’s a long description of the girl, but this fragment lacks a complete thought and doesn’t tell us what verb the girl actually performed.

Sentence! We’ve got a subject and verb and they work together to create a completed thought.

As you cultivate “fragment recognition” and editing skills, use ProWritingAid to help you keep your writing fragment-free. It will highlight the sentence fragments in your writing, and explain how to remove them. 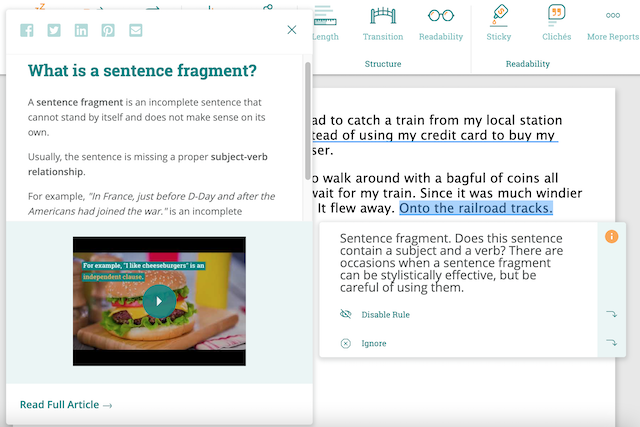 With time, you'll learn how to avoid writing sentence fragments completely. Until then? Sign up for a free ProWritingAid account.

How Do You Identify a Sentence Fragment?

The paragraph tells about one of the dumbest things I’ve ever done (as an adult, at least). Don’t judge! I’ve numbered each entry so you can determine its sentence status: complete or fragment?

(1) About 10 years ago, I took a stupid risk. (2) I had to catch a train from my local station and was mad at myself for running late. (3) Instead of using my credit card to buy my ticket. (4) I put a $20 bill into the ticket dispenser. (5) Not realizing I would be given my change in coins!

(17) I estimated the platform would be about waist high once I jumped to the tracks, and I could easily hoist myself back up (18) Down I went! (19) I retrieved my ticket and turned back to the platform to climb up. (20) Which wasn’t going to be as easy as I’d planned. (21) I had misjudged its height. (22) It was eye-level. (23) Far higher than my center of gravity.

(24) I panicked for a moment, cursing myself for taking such a foolish risk and hoping bystanders would help me if I couldn’t get myself off the tracks!

Just kidding. I made it out alive all by myself. Apparently, my panic generated a surge of adrenaline and I hauled myself to safety before the train entered the scene. I was embarrassed. Completely and appropriately so. But I was alive!

How Do I Fix Sentence Fragments?

It’s important to recognize sentence fragments, but even more important to fix them. Here is a fragment-free version of the train-ticket episode.

About 10 years ago, I took a stupid risk. I had to catch a train from my local station and was mad at myself for running late. Instead of using my credit card to buy my ticket, I put a $20 bill into the ticket dispenser, not realizing I would be given my change in coins!

My mood soured even more. Now I’d have to walk around with a bagful of coins all day! I climbed the stairs to the platform to wait for my train. Since it was much windier on the platform, I lost my grip on my ticket! It flew away and onto the railroad tracks.

I walked to the edge of the platform and looked down at my ticket. “It’s not worth it,” the guy next to me said, sensing that I was thinking of jumping on the tracks to retrieve it. Though I knew he was right, I decided to get it anyway.

I estimated the platform would be about waist high once I jumped to the tracks, and I could easily hoist myself back up. Down I went! I retrieved my ticket and turned back to the platform to climb up, which wasn’t going to be as easy as I’d planned. I had misjudged its height. It was eye-level, far higher than my center of gravity.

I panicked for a moment, cursing myself for taking such a foolish risk and hoping bystanders would help me if I couldn’t get myself off the tracks!

Is It Ever Okay to Use Sentence Fragments? 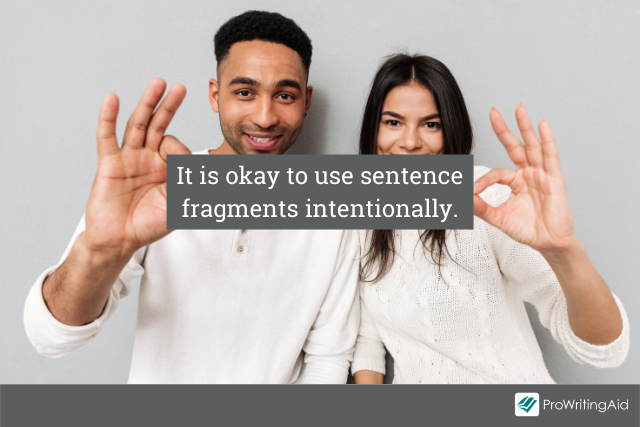 See the bold sentences in the paragraph after the end? Those are fragments that I used on purpose. I used them to create a rhythm and emphasize certain words. So, yes, you can break the rules of grammar and use incomplete sentences for artistic purposes. However ...

Before you break the rules, you need to show that you know the rules, which means most of your sentences should be complete. The fragments need to be purposeful and the ideas they convey need to be clear to your reader. 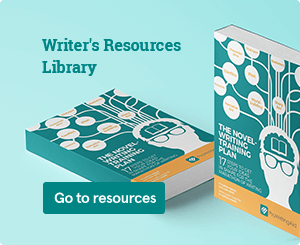 Verbs
What is a sentence fragment?

Verbs
It's vs Its: When Should You Use Them

Verbs
What is the difference between 'pray' and 'prey'?

Verbs
What's the difference between "due to" and "because of"?

Verbs
What should I do if my paragraphs are hard to read?

Verbs
Why you should vary your sentence lengths

Verbs
Can I start my sentences with a conjunction?