When it’s Right to be Wrong 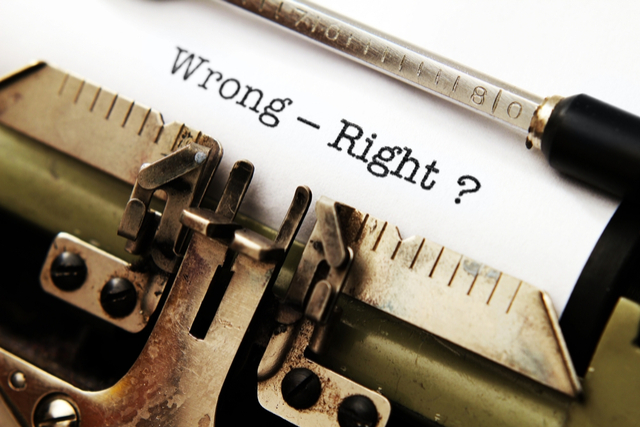 The definition of grace, as ascribed to Jacqueline Kennedy, is making others feel comfortable.

We don’t typically associate “grace” and “grammar,” but there are those occasions when it’s perfectly acceptable to be grammatically incorrect. To do otherwise may make you appear elitist.

This article looks at correct usage of pronouns and prepositions, followed by a quick glance at those instances when, grammatically speaking, it’s right to be wrong.

First, the Simple Rule for the Correct use of Pronouns

The choice is made simple if you are able to recognize the various forms of the infinite verb “to be.” Try repeating as fast as you can these “weak," intransitive verbs: am, is, are, was, were. Once you have them committed to memory, you’ll be able to identify them right away. When they stand alone in a sentence, you must use the subject case pronouns.

The other forms of the “to be” verb are easy to spot because they have some form of “be” in them: have been, could be, had been, and so on.

The pronouns I, he, she, we, they must be used if the verb that governs their usage is a weak verb. Again, the weak verbs are any form of the verb "to be." Most of those have the word "be" or "been" in the verb. But five forms must be memorized because the verb is an irregular one. Those five are am, is, are, was, were.

The pronouns me, him, her, us, them must be used whenever a preposition governs their usage. These are the most common prepositions:

If you know your prepositions, you’ll be able to see or hear them immediately. They usually precede your pronoun choice. When you find a preposition, you should select the object case pronoun you need.

The following sentences may or may not contain errors. If you feel corrections are needed, indicate where pronouns should be changed. Check your answers at the bottom of this post.

The Acceptable Violation of Pronoun Rules

My mother made it to the 8th grade and then dropped out of school to help support a large family that lost their father when he was only 42. She may have learned the rules for pronoun usage, but her life demanded attention to far more important issues.

Once, she and I were watching an old movie and she spotted a familiar face on the television screen. “Isn’t that Jimmy Stewart?” she asked.

Only you will be able to decide when it’s right to be grammatically wrong. You can, of course, speak and write (emails, especially) that are perfect. But there are times when each of us may opt to ignore the rules of grammar and abide, instead, by the rules of gracious behavior.

A Final Word About Pronouns, Propriety, Politeness, and Preferences

As language-lovers, we also have an obligation to the “rules” that go beyond linguistic propriety. There are other rules, perhaps not written, that pertain. Whether you are giving maximum information or minimum information, be guided by another Jackie aphorism: “I want minimum information,” she once asserted, “given with maximum politeness.”

How well did you do?

Here are the answers:

If you did not have a perfect score, go back to each sentence in the quiz and find either the weak verb or the preposition that governs the choice of the subject-case pronoun or the object-case pronoun.