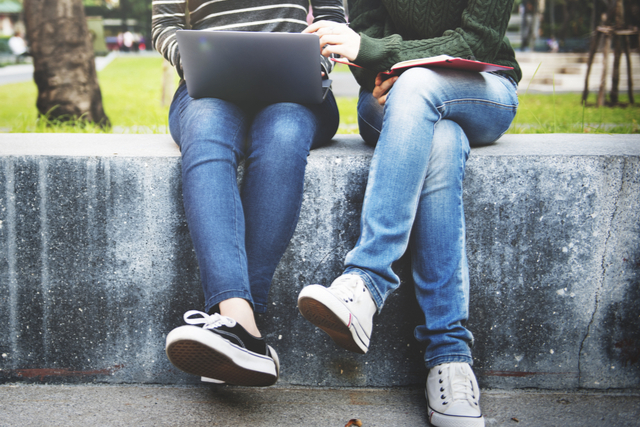 Conjure up an image of the writer at work, and most picture a brooding author crouched over her keyboard with empty coffee mugs and notes scattered across a cluttered desk. Perhaps a cat lounges on a pillow, or a plant peers from a windowsill. If one is feeling particularly generous, maybe the writer sits in a coffeehouse with others mulling about their business, but another human being rarely enters the writing process.

I understand the romanticism in this image, but truth be told, very few great things come about from the mind of a single person. Just check the acknowledgements in the back of your favorite novel.

So, even for the writer with her own ideas and goals, co-writing offers some helpful tools.

Me and my cowriter

I have known my cowriter for six years. It’s a long story full of coincidences and serendipity, but here's the short version:

We both wrote on an anonymous writing website where we worked on stories under pseudonyms. My cowriter and I met in the typical way: she reviewed my chapter, and out of common courtesy, I reviewed hers in return. We liked each other’s work, so we continued to follow and review, and we eventually started private messaging. Even then, we mostly talked about our writing, but over time, we started getting to know each other beyond our pseudonyms.

It was at that point we discovered we lived not only in the same country but the same state, a mere four-hour drive away. We met up, then tried to make regular visits. She spent a week with me for Thanksgiving; I stayed with her a week in the summer. We stole weekends in between.

Sometime over the course of our friendship, we decided to write a sequel to both our stories where our characters met. A joke, obviously, we said. Just for fun, we laughed.

This fall, we are completing a four-book series that originated with those two stories that brought us together and the joke sequel we decided to write.

Writing is a solitary task

Even when my cowriter and I spent the week together, long hours saw us each on a different couch engrossed in our laptops. We only spoke to discuss the occasional plot point or laugh at a joke we had just written. Every few hours, we exchanged laptops to review how the other was doing.

Now, there’s a reason why most books on the shelves only list one name. Some writers have creative differences, some prefer to work alone, and some do not want to share their characters, their universe, their baby with someone else. That’s all totally understandable, but I do think there are some aspects of co-writing that can benefit everyone.

Sometimes we hit a snag in our plot. We needed something to happen, but motivations, logistics, or something else was preventing us from writing how we wanted. During these moments, we put aside our laptops and we talked. We voiced all possible ideas, even the most stupid and ridiculous ones, and bounced thoughts off each other until we eventually found a solution that neither one of us could have created on our own.

Even if you don’t have a cowriter or a friend who writes, you can do this with anyone. Sometimes a non-writer perspective works even better. Just call someone you know and trust, and ramble until you find the solution.

Even the most devoted writer cannot labor at their manuscript for 24 hours straight. When my cowriter and I felt bogged down with plotlines and character arcs, we took a break to work on other aspects of our project.

We bought a giant poster board and markers, and we drew a map of our universe. We looked up pictures and quotes on Pinterest, and we made our own art for inspiration. Sometimes we just wrote our characters in a different universe to make each other laugh or smile. Yes, writing is hard, but you’re supposed to enjoy it.

And who says you need a cowriter to do that? With a few dollars and an internet connection, you can easily take a break to work on some fun side quests that still contribute to your project as a whole.

When I give myself a deadline, I can also give myself an extension. When I tell my cowriter my deadline, suddenly I have someone waiting for my chapter, and more importantly, someone who notices when I fail to hold up my end of the deal.

There are all kinds of tips and apps for accountability, and events like NaNoWriMo help as well, but the key is finding some way that makes you keep to the deadline you set for yourself. Tell a friend or join a writing community. Whether on Twitter, Tumblr or some other platform, there are a lot of writers out there willing to encourage you and cheer you on in your pursuits.

And who knows? As my cowriter and I can attest, you might just meet a lifelong friend there, too. Maybe even start a worthwhile project together.

Writing is a solitary task, but no one said it had to be lonely.

Jessie Smith is studying journalism in university, but she writes anything nonfiction or fiction. You can find her on Twitter