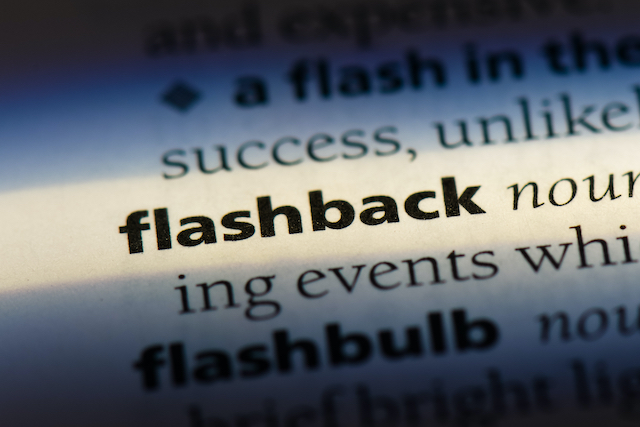 Flashbacks can be a writer's best friend. They are an incredibly effective way to add depth to character and texture to your story. But beware! Mishandled, they can be confusing and irritating for your reader to follow.

What is a flashback?

A flashback is a scene you use in your current narrative to show something that happened in the past. The two key differentiators are: 1) it must be a scene (as opposed to narration about an event), and 2) it’s past news.

Flashbacks are great for building three-dimensional characters because readers gain insight on how a character’s thoughts, feelings, and morals were formed by important events. They’re also useful for dropping hints about what happened to lead your main character to the current point in time. They help your readers understand and care deeply about your characters and what happens to them.

What a flashback is not…

Before you use a flashback, ask yourself if the story would be more suspenseful if the reader didn’t know the information. Sometimes knowing less about a character is better. Or, ask yourself if you could cut the flashback without impacting your plot in any substantial way. If so, it’s not essential and should be cut.

How to write a vibrant flashback that readers need

1. Use an inciting trigger.

Something needs to set off the memory in your character’s mind about what’s being conveyed in the flashback. As an example, Liane Moriarty’s Truly Madly Guilty uses flashbacks as a substantial part of the story.

The main characters of the novel attended a backyard barbecue where something horrific happened. The novel begins with present day and we see the characters dealing with fall-out from that event.

The first two chapters focus on the two main characters individually, and the third chapter starts with the flashback. Moriarty titles it 3: The Day of the Barbecue so you immediately know you’re going back in time. In addition, the last sentence of Chapter 2 reads, “She put her head back against the seat, closed her eyes and remembered a silver car driving toward her, surrounded by a swirling funnel of autumn leaves.” Clever trigger moment. You know something’s coming.

The entire novel follows this pattern of present-day chapters interspersed with what happened the day of the barbecue.

Your trigger moment could be anything that reminds your main character of the past event: a sight, a scent, a song, or some other stimuli.

If you’re writing your story in past tense, when you begin your flashback, you should switch to past perfect. This signals a change to your reader.

For example, you’re writing your story in past tense, and the main character remembers a harrowing experience in her childhood that has a prominent effect on her today. You would transition as follows:

If your flashback is longer than a paragraph, you can switch to past tense after the first couple of sentences to help the reader move through it faster. If you do this, the last two sentences or so in the flashback should revert back to past perfect to help you reader know that you’re getting ready to shift back to the present story.

Similarly, if your story is in present tense, you can simply move to past tense to signify a flashback is taking place.

3. Ground your reader in time and place.

An easy way to accomplish this is handled adeptly by Suzanne Collins in The Hunger Games. When Peeta Mellark’s name is drawn as the male tribute, Katniss goes back in her mind to the only interaction she’d ever had with him.

Other writers will create a break either by adding lines between paragraphs or some other identifying mark.

The key is to make sure that you start off by telling your reader when and where this scene takes place. If your story takes place in the present day and your flashback happened to your main character as a child back in the 1980s, you could start your new scene with:

The same is true at the end of your flashback. Use a trigger that brings your character back to the present moment and signals to the reader the flashback’s end.

4. Keep it brief and stall as long as you can.

Try to hold off telling this backstory information until you’re 20 percent into your story. Or better yet, can you hold off until half way through? How about 75 percent? The longer you can hold off and give only the bare bones information, you’ll exponentially increase the tension and suspense.

A great example where the flashback is a large part of the story is John Irving’s A Prayer for Owen Meany. Throughout that novel you are focused on the consequences of a moment from the past, without knowing exactly what went on. Irving drip-feeds information along the way, but it’s not until the final flashback that you have the climax and finally understand what’s happened.

5. Use flashbacks to advance your story, but use them sparingly.

Think of when you meet a new friend or partner. You don’t automatically tell them everything about your past. You dole it out on an as-needed basis.

Your flashback is only appropriate if it’s relevant to what’s happening currently in your story. While it’s nice for writers to know everything about a character’s past, what happened at the Christmas party in 1978 is only worth knowing if it changed your character and made him who he is today.

On the other hand, flashbacks like in Moriarty’s and Irving’s novels are the meat of the story, but they’re both experienced and best-selling authors who can leverage their success into trying new things. If it feels right for your story, be brave and go for it! But be prepared for complications because it’s not easy.

So how you handle flashbacks can make them the best friends that connect you deeply with your readers or your worst enemy by irritating your reader enough for her to put your book down.

The most important result of a flashback should always be that Your reader’s understanding of the story and/or your character has changed significantly.

If your flashback exposed information that makes your reader reinterpret what they think about your character, or if it helps them understand your character going forward, you’ve achieved the after-effect you want.

And remember, a flashback should be structured like any other scene with a beginning, middle, and an end. Check out our post: Create Compelling & Evocative Scenes

Finally, study how other writers use flashbacks and experiment with scenes in your own work. Then see what your beta readers think, and use their feedback to strengthen your work.

Let’s start a list of the best use of flashbacks. Tell us in the comments below what’s your favorite flashback.