How to Master "Show, Don't Tell"

Most writers have probably heard the phrase “show, don’t tell” more times than they care to recount. That advice has been given so often it’s bordering on triteness. So in this post, we’re going to take several steps further. Here's how to master show, don't tell.

Bartholomew was apprehensive. He was nervous and he was worried, and more than anything, he was afraid of what might come next.

You still awake? Just checking. I wouldn’t blame you if you dozed, because that was pure telling. The magic of writing is making people feel a certain way without instructing them to feel that way. So when we tell—or simply state exactly what’s going on and how a reader should feel about it—we extract that element of magic.

Showing is the remedy. Let’s try that same passage, only we’ll show instead.

Bartholomew licked his lips and checked his watch. Again. His right hand was trembling so he clamped it behind his back with the left. But that only passed the tremor to his right foot, which set to tapping on the sidewalk. He breathed in and let out a rattling exhale.

See the difference? Here we’ve shown that Bartholomew is nervous rather than telling the reader. This creates a much more vivid scene and establishes a stronger sense of storytelling.

Now that we see the value of showing over telling, let's examine a few ways to make it happen.

Take Lessons from Other Mediums

“Show, don’t tell” applies particularly well to writing prose because it is one of the easiest storytelling mediums to tell with. If you’re writing from a first-person perspective, for instance, you can simply state a character’s feelings. In other mediums, this is more difficult.

Take screenwriting as an example. Since it’s a visual medium, it’s more necessary to show and more difficult to tell. For example, take one of the most famous lines in cinema history:

Those are Rhett Butler’s parting words to Scarlett O’Hara at the end of Gone With the Wind. They show us a clear message without outright telling us: Rhett and Scarlett’s romance is over, and it’s not coming back.

In other words, screenwriting as a medium offers fewer opportunities to tell. They’re still there, but they’re not so plentiful (and generally not so tempting) as those in prose writing.

So let’s take a lesson from screenwriting. Since it’s a visual medium, it might help us to show more by treating our writing like it’s a visual medium. Rely on realistic dialogue to describe a character’s inner feelings rather than direct description. Evoke feelings—don’t state them. Use nuance when establishing mood rather than pounding the reader over the head with it.

The process is not the work. And we all know that showing is difficult, especially in a first draft. So when you’re writing, remember that just because you’re telling now doesn’t mean you can’t show later. Let me give you an example.

Therefore, it’s okay to tell in the first draft. See below.

Grumlee is always mad. She hates when people giggle at her odd name, so she gets really angry.

This is lousy writing, but it’s clear. Grumlee is an angry person. Now that I’ve told myself that about my own character, I can go back in a later draft and show my readers.

When Grumlee heard the giggle, her fists clenched and her back went rigid. Were they laughing at her? She turned slowly, face red, fists now trembling. 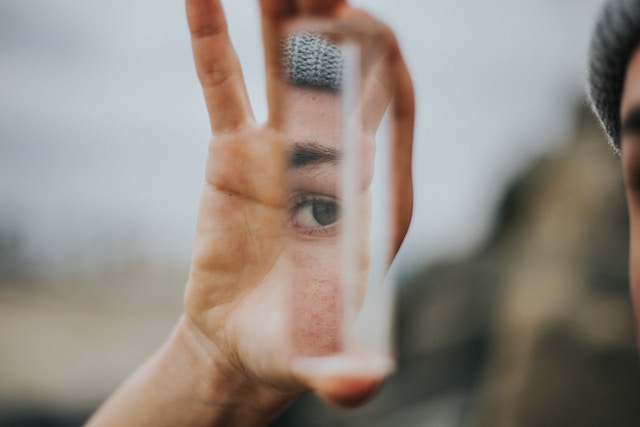 Recognize When It’s Okay to Tell

You need not always avoid telling. In fact, there are some instances where you probably should tell instead of show. The classic example is the mirror.

You know the scene I mean. In many books, you’ll encounter a scene where a character conveniently discovers a mirror on the wall. They peer into said mirror, and then the writer has an excuse to show you what the character looks like.

Does it work? Sort of. You’re showing what the character looks like rather than outright stating it. However, this moment almost always feels contrived. And the more hoops you jump through to find a convenient way to show your character's looks, the more contrived it feels.

Instead, this is a moment where it’s best to simply describe your character. Just use your narrative voice to offer pertinent physical details. Is it telling? Yes. But in this instance, telling will not only save you time—it will end up feeling more natural than engineering a situation where you can describe the character.

Look for other moments like this in your work. They’re definitely around. If a scene feels contrived because you’re showing too much, try telling a bit more. Or if you’re wasting time setting up a way to show something, try telling it instead.

"Show, don’t tell" is good advice, but it doesn’t show us (or tell us) the whole picture all by itself. Use these tips to master the phrase. Your writing will be better off for it.

guestcolin992
Some great advice that gives me a better idea of how to write better. Many thanks

joylennick
Most interesting. Thank you. I do try to do both and totally agree it is well worth thinking prose through before you commit it to paper in a regimented fashion. I have a few, favourite writers and they all write exquisite prose. Cheers!

millie.dinsdale
Thank you for reading! Which writers do you admire the most?